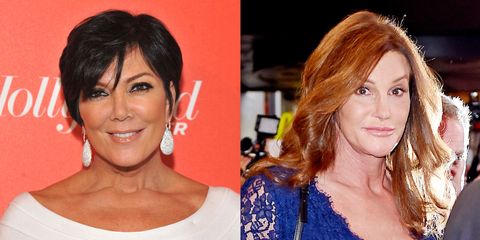 Update, 9/18: While we're getting to know Caitlyn Jenner, we have to remember that the Kardashian and Jenner fam are, too. And sometimes, the changes aren't immediate.

"I say 'Jenner'," she explained to Access Hollywood. When asked whether she'd ever curl up with her former partner, Kris explained that she's taking the transition gradually. "I don't know about curl up on the couch," she said. "But she came over for a drink last night and that was nice."

Update, 9/3: In the latest teaser clip fromI Am Cait, we get a peek inside Kris and Caitlyn's emotional first meeting. While things are visibly a little tense, it's clear they're making strides to keep things amicable.

"We've moved on, both of us, but I don't want to throw all of the good times away," says Caitlyn. "And for the kids, Kendall and Kylie, I don't want tension."

Watch the preview below:

Update, 7/30: It happened. Exes Kris Jenner and Caitlyn Jenner finally met face-to-face, reports E!. According to reports, the two had a reunion and chatted at Caitlyn's home in Malibu. Caitlyn Jenner is currently filming I Am Cait, and we have our bets that this (sure to be emotional) meet-up will be shown on the show.

Both exes have praised each other in light of Caitlyn's transition, with Caitlyn confessing she thought Kris was a "really good woman," and Kris saying she thought Caitlyn "amazing and brave." To which we say: This is how a break-up is done, folks.

Original post, 7/17: Caitlyn Jenner brought the audience (at home and in person) to tears when she accepted her Arthur Ashe Courage Award at the 2015 ESPYs—and it seems her ex Kris Jenner was no exception.

While Caitlyn's kids rallied around her that night, Kris Jenner was noticeably absent. But that didn't mean she wasn't watching at home. "I think it was amazing and very brave," she told Us Weekly of Caitlyn's 10-minute speech at Amazon Prime's Summer Soiree. "I think she looked beautiful."

A+ response Kris. We think she looked gorgeous, too.