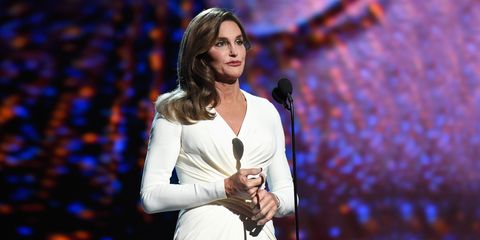 It's been a long time coming, but Caitlyn Jenner has finally stepped, quite literally, onto the world's stage. At tonight's ESPY Awards, where she was honored with the Arthur Ashe award for courage, Jenner spoke—as herself—for the first time.

"The last few months have been a whirlwind of so many different experiences and emotions," Jenner said breathlessly after being welcomed by a standing ovation and assuming a confident place behind the mic. "I've never felt more pressure than I've ever felt in my life."

Dressed in an elegant white pleated custom Versace gown and sideswept, retro-glam waves, Jenner cut a striking figure on the stage. "Picking out this outfit...okay girls, I get it," she conceded, laughing. "It was exhausting!"

Jenner is here, as she stated time and again on tonight's stage, in the hopes to change that. "If there's one thing I do know, it's the power of the spotlight. And with attention comes responsibility. I'm here to promote a very simple idea: Accepting people for who they are. Accepting people's differences. My plea to you tonight is to join me."

As much of her family—Kim, Kourtney, Kendall, and Kylie—looked on, Jenner eventually broke down. "Here comes the tough part," she said as she started to cry. "I'd like to thank my family. Most of all, my family and my kids. I always wanted my children to be so proud of their dad. You guys have given so much back to me, so much support. I'm so, so grateful to have all of you in my life."

There is, of course, much more Caitlyn Jenner to come. "If you're wondering what this is all about—courage or controversy or publicity—it's about what happens from her," she said. "It's not just about me, it's about all of us, accepting one another. We're all different; that's not a bad thing. And while it may not be easy to get past the things you don't understand, I want to prove that it's absolutely possible. Thank you for this platform."

To see the moving tribute film shown at tonight's awards, watch below.

Jessica Pels Editor-in-Chief As the editor of Cosmopolitan, Jess oversees the editorial for all of Cosmo's efforts across print, digital, video, and emerging platforms.
This content is created and maintained by a third party, and imported onto this page to help users provide their email addresses. You may be able to find more information about this and similar content at piano.io
Advertisement - Continue Reading Below
More From Celebrity
The Queen's Hot Grandnephew Is a Thirst Trap
Watch Diana Play Impromptu Piano in Rare Clip
Advertisement - Continue Reading Below
Peek Inside the Cambridges' Country Home
Harry Is Heartbroken About His Family Situation
William and Harry Could Fight Over Diana's Legacy
William Reveals Which of His Kids Is the Cheekiest
Serena Williams's Daughter Is Taking After Mom
EmRata Opts for Faux Fur and Yeezy Boots
Rob Lowe: Prince Harry Is Rocking a Ponytail Now
Rihanna Stuns in $2 Million of Diamonds and Rubies