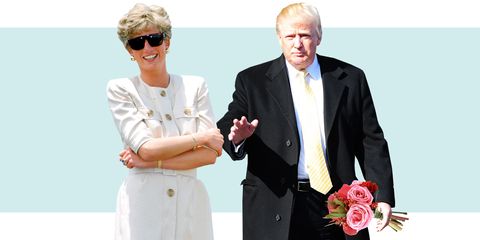 Donald "Scared of Natural Human Processes" Trump has this weird complex where he seems to hate women, but at the same time, he also wants the ones he considers young and beautiful to like him. (Makes sense.)

Late-'90s Donald Trump had already embarked on this mission when he saw an opportunity to win himself "the ultimate trophy wife": Princess Diana, who had just divorced Prince Charles.

"He bombarded Diana at Kensington Palace with massive bouquets of flowers, each worth hundreds of pounds," BBC presenter Selina Scott wrote in the Sunday Times. "As the roses and orchids piled up at her apartment she became increasingly concerned about what she should do. It had begun to feel as if Trump was stalking her."

At one point, Scott says the princess even asked her, "What am I going to do? He gives me the creeps." (This is the part where Trump would interject "She didn't like my orchids because she was shedding her uterine lining!")

A representative for Trump has since told the Times "they had a great relationship, liked each other a lot, but nothing ever came of it." Which is a pity because in his memoir, he wrote that "his one regret in the women department [was] that I never had the opportunity to court Lady Diana Spencer."

Chelsea Peng I'm Chelsea Peng, the assistant editor at MarieClaire.com.
This content is created and maintained by a third party, and imported onto this page to help users provide their email addresses. You may be able to find more information about this and similar content at piano.io
Advertisement - Continue Reading Below
More From Celebrity
Kate and Charlotte Hunt for Spiders Together
Princess Diana's Nieces Opened Up About Their Aunt
Advertisement - Continue Reading Below
Elizabeth Hurley, 55, Shows Off Toned Abs On Insta
Keira Knightley Won't Do Nude Scenes Filmed by Men
Kourtney Kardashian Is Dating Travis Barker
Priyanka Chopra Jonas Talks Her New Memoir
Priyanka and Nick on Their Quarantine Quality Time
Priyanka Pulls Back the Curtain
Sussexes Will Return to Social Media, Harry Said
A-Rod Celebrated J.Lo's Inauguration Performance