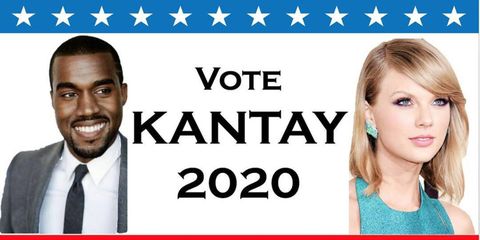 Update, 9/5: Kanye has officially made peace with Taylor Swift—and unofficially made her his running mate for his alleged campaign in 2020. (Or did she unofficially elect herself for the role?) The rapper sent one of his famously extravagant floral arrangements to Swift, which she promptly shared on Instagram, because see! no bad blood here!

The newly-labeled BFFs have sparked major fan frenzy with their reconciliation and supposed presidential run. And hey, if Donald Trump can run in 2016, why not #KanTay2020?

Update, 9/4: If you want to, um, show your support for Kanye's alleged future presidential run, TMZ has decided to make it possible by debuting a variety of Kanye 2020 campaign T-shirts—even getting Taylor Swift in on the action.

The three different styles are emblazoned with "West/Swift 2020," "Kanye For President," and "President Kanye Bro," and are available for $25 each at dilasciashop.com.

Hey, at least your Halloween costume planning is done.

Update, 9/2: If Kanye is serious about this running for presidency thing, he can count on one more celebrity supporter to be marking down his name: Rihanna.

Too bad Barbados-born Rihanna can't run for VP, because *that* would be a joint ticket unlike any other. We can already see the signs now: "Kanye for Pres—and RiRi for VP." Ah, well.

Update, 3/31: The United States of Yeezus could be a serious statement one day. After announcing his plans for a presidential run, West got the support of many a tweet (or hundreds)—and also support from his Kardashian/Jenner clan, who posted messages to their social media accounts. Take a look:

But Kourtney takes the cake:

Original story, 8/30: After being presented with a Lifetime Achievement Award at the MTV VMAs by none other than Taylor Swift (he's her "friend," you guys), Kanye West gave a speech that addressed a number of things, including how his perspective has changed now that he's had a daughter, that he's a fighter for the artists ("sometimes I feel like I've died for the artist's opinion"), and that he *may* have had a bit of marijuana to "take the edge off." But then, Kanye finished his speech in the most Kanye way possible—by announcing his presidential run.

"It's about ideas, bro, new ideas, people with ideas, people who believe in truth. And yes, as you probably could have guessed by this moment, I have decided in 2020, to run for president."

And that's that. Welcome to Yeezus country. Hey, if Donald Trump can do it...

Does he have your vote America? @kanyewest accepts the Video Vanguard award http://t.co/pyg3SBh8gq