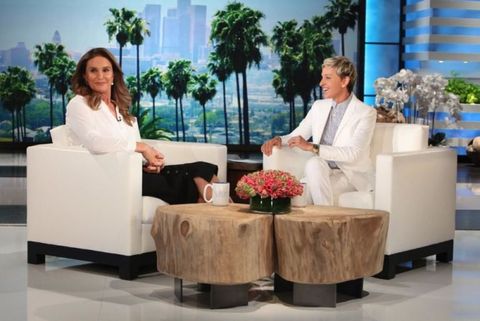 Update, 9/15: It is tough being on the receiving end of Ellen DeGeneres's annoyance, so after sitting through an awk interview and some reflection on same-sex marriage, former "traditionalist" Caitlyn Jenner now stands 180 degrees from where she began.

"Like many people, there was a time when I didn't realize how important it is for gay couples to have the right to get married," she wrote in a blog post published Monday. "But after hearing from my gay friends and learning more about the hardships they faced because of discrimination, it became clear to me that everyone should be able to marry the person they love. I can only hope that by sharing my story, there's someone out there whose mind has been changed about trans people."

This isn't a reversal brought on by popular expectation and wanting to be well-liked, is it? Nah, couldn't be.

Original story, 9/9: With her very public transition, Caitlyn Jenner became a worldwide LGBT icon, whether she intended to or not. But as a recent interview with Ellen DeGeneres proves, she's still not all the way there.

DeGeneres grilled her about gay marriage, since Jenner is a Republican and many conservatives are still against marriage equality and trans issues. "I don't ever want to stand in front of anybody's happiness. That's not my job," she said. "If that word 'marriage' is really, really that important to you, I can go with it."

It's not exactly an enthusiastic endorsement of gay rights, and DeGeneres was taken aback. She elaborated later in an interview with Howard Stern: "She's Republican and conservative, and I think a lot of Republicans are wishing she wasn't Republican," she joked, adding, "Maybe she didn't want to dance with me because I'm a lesbian." (Jenner, for her part, isn't quite ready to say whether she'll date men or women going forward.)

But in all seriousness, DeGeneres still doesn't quite get why Jenner isn't gung-ho about gay marriage—to DeGeneres, Jenner needs to understand that equality is equality. "We want the same thing everybody [wants]," she told Stern. "I don't fully understand [transgender issues], but I want her to be happy. Which is what I want for her, for me."

This content is created and maintained by a third party, and imported onto this page to help users provide their email addresses. You may be able to find more information about this and similar content at piano.io
Advertisement - Continue Reading Below
More From Celebrity
Will and Kate Attend the ‘No Time to Die’ Premiere
Meghan Markle Might Not Ever Go Back to the UK
Advertisement - Continue Reading Below
Are Angelina Jolie and The Weeknd Dating?
Kate and Will Ate Burgers With Their Kids
Meghan Markle's Handbag Was a Nod to Diana
Ben Affleck and Jennifer Lopez Made Out in NYC
Lady Gaga Stunned in an Old Hollywood Look
Olivia Rodrigo Looked Jaw-Droppingly Beautiful
Will's "Alleged Bullying" Drove the Sussexes Out
Sam Asghari Opens Up About Britney Documentaries