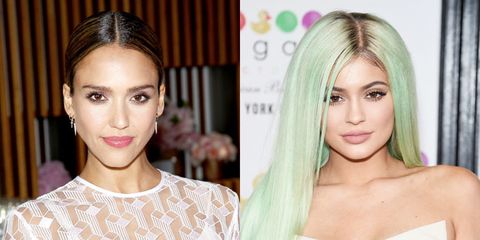 Update, 9/19: Kylie Jenner sure made a spectacle of herself at New York Fashion Week. Modeling for Yeezy Season 2 and sitting front row at Alexander Wang and Prabal Gurung, the teen reality queen was a constant fixture at this year's events.

However, Jenner's presence was most felt (literally) by Jessica Alba at the Opening Ceremony presentation. During an appearance on Watch What Happens Live, the actress told host Andy Cohen how she was hassled by the 18-year-old's bodyguards at the show.

While Alba described the experience as "really shocking," even more shocking is the gesture made on Jenner's part to try and say sorry for the NYFW snafu: a *gorgeous* floral arrangement. C'est klassy!

"Wow! Came home to the most beautiful flower tree I've ever [seen]!" Alba wrote on Instagram. "Thank you @kyliejenner you are a sweetheart!! So thoughtful."

It's safe to say this apology has been more than accepted.

Original story, 9/17: Jessica Alba got a rude awakening during NYFW. No, it wasn't huge crowds or pushy seat-stealers or (gasp!) a broken heel. It was the fame of someone else, all up in her grill. (Quite literally.)

While on Watch What Happens Live, the actress and entrepreneur told Andy Cohen that she was hassled by Kylie Jenner's bodyguards at the Opening Ceremony show.

Alba told Cohen that she thought it was a real emergency for her to be that forcibly moved. "I thought there was like a fire. I was like, 'What's going on?' But I guess someone was just leaving the building. It was just really shocking."

And there you have it—even famous people can't come close to those Kardashian-Jenners without some serious manhandling. (So don't even try.)

Samantha Leal Senior Web Editor I'm Sam, the senior editor at MarieClaire.com.
This content is created and maintained by a third party, and imported onto this page to help users provide their email addresses. You may be able to find more information about this and similar content at piano.io
Advertisement - Continue Reading Below
More From Celebrity
Lady Gaga Wears Athleisure and Platform Shoes
Meghan Markle Possibly Shared a Photo of Lilibet
Advertisement - Continue Reading Below
The Kardashians' Most Body-Confident Nude Shoots
What Happens on Katie's Season?
Britney Spears Says She Was Locked in a Bathroom
Kate and William Holiday In Cornwall
Blake Lively Wears a Pink Sequin Dress
Meghan Markle Hangs Out With Melissa McCarthy
Simone's Boyfriend Sent Her the Sweetest Message
Rebel Wilson Recreated This Britney Spears Look