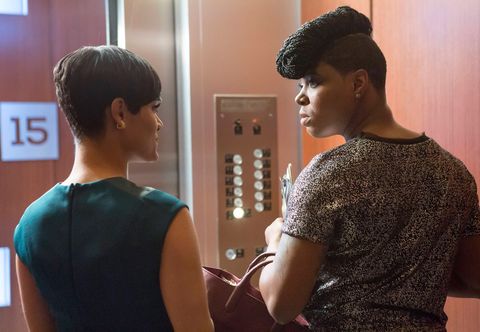 To watch Empire is to love Porsha. Cookie's assistant is crazy-funny, a little crazy-crazy, and 100% badass. Oh, and did we mention her style? Flawless. We sat down with Ta'Rhonda Jones and found out that the woman behind our favorite TV show character is just as awesome in real life.

Marie Claire: What is it about Porsha that makes us love her so damn much?

Ta'Rhonda Jones: She's sassy, she's fierce, she's fearless. She's just one of those girls who loves to live in the moment. She doesn't worry about yesterday because it's gone. She doesn't worry about tomorrow because it's not here yet. She only worries about today and today only, and she lives for that day and that day only. She's pretty much stress-free. And she's fun and quirky.

TJ: I'm not going to give you all the spoilers. I'm going to give you some, because I need my job. You can expect crazy, crazy fashion. It's different. The clothes are super crazy this season and colorful hair. Anybody who knows me knows I don't play about my hair. So this time I get to incorporate some of me, my personal hairstyles, in the show. That's all I'm going to give you. That's it, sorry!

TJ: It's love-hate. Despite how Cookie talks to Porsha, Porsha knows where her loyalty lies. She knows at the end of the day Cookie's gotta sign her paycheck. We're still trying to figure out where Porsha comes from, and we want to know why she's so loyal to Cookie—because I don't understand. Me, personally, I wouldn't sit there and stick around…

MC: Empire is your first-ever acting gig—was this always something you wanted to do?

TJ: At some point, I did. I just never pursued it because I never thought it could actually happen to me. I know you gotta go to all these fancy schools, get all these fancy degrees and I was just like, It could never be me. And it took until last year, until I got the phone call, when I just jumped out on a limb, on faith, and here I am.

MC: You get to improvise on set, right?

TJ: Absolutely. All of the time.

MC: How does that work?

TJ: We get a script, a few lines, and me personally, I like to talk. So, when I read the lines and I'm like, This is not long enough, so I throw in as much as I can and they'll be like, "Really Ta? Keep it. Come on. Let's go. Do it again."

MC: Do fans call you Porsha in real-life?

TJ: They do! You know, my mother, she calls me Porsha. When she gets mad, "Alright, Porsha! Enough is enough, Porsha."

"You can expect crazy, crazy fashion. It's different. The clothes are super crazy this season."

MC: You also rap under the name Lady Heroin—will we get to hear your music on the show?

TJ: Maybe—in the show, Porsha does throw out there that she's musically inclined. Cookie continuously shuts her down, though. I kind of threw this out there to Empire director Lee Daniels: One day I should be in the studio just doing my thing and then somebody walk in on me and be like, "What? She raps?" Bam! Then Lucious takes me, then Cookie and Lucious fight over me, and then Lucious kills me. You know, they kill everybody. Everybody dies. I'm just saying.

TJ: Real retro, urban, street rap. I've been doing that since I was about ten or eleven years old. I've been rapping for a really long time. Before Empire I used to go to these rinky-dink bars and little rinky-dink clubs and open up for people. Recently, I just opened up for Lil Kim about two months ago.

TJ: I know, and she's so sweet! I opened up for her and when she saw me she was just like "Oh my God! Where did they find you? You are everything!"

MC: Your style game, on the show and in real-life, is on point.

TJ: My motto is: I refuse to be basic. I think that's what's gotten me here so far.  Trying to step outside of the box , do something different. My brother tells me this, and I love when he says it, I'm "what the world's been missing."

"My motto is: I refuse to be basic. I think that's what's gotten me here so far."

MC: Empire is known for its crazy-huge guest stars—who's your dream cameo?

TJ: Alicia Keys! I heard she was going to be on the show—I haven't seen her name on a call sheet yet, but when I do, it's going to be a problem. I'm going to stalk her. She's going to be like "Wait a minute, somebody get this crazy girl out my trailer…my shower!"

MC: And if you had your own Porsha, what would you have her do for you?

TJ: Get shoes! I think she's good at getting shoes. And she knows where all the good food spots are, because if you ever catch her, she's always eating something.

MC: So would you hire Porsha to be your assistant?

TJ: No. I'd hire her as a friend, though. Everybody's got one of those friends that make you just be like, Really?! But you love her.