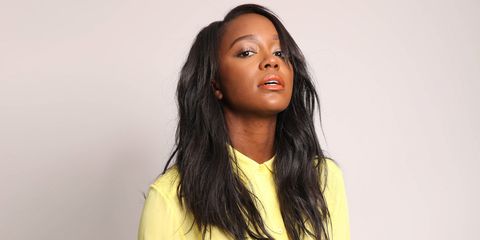 Aja Naomi King is an actress to have on your radar, if she's not already there. As uber-driven Michaela Pratt, she's one of How to Get Away with Murder's biggest up-and-coming stars. She also has a leading role in next year's The Birth of a Nation, a Nate Parker-directed Nat Turner biopic with a cast that includes Gabrielle Union, Armie Hammer, and Parker himself playing Turner. One of the coolest things about King? Despite the whirlwind of her rapid success, she's all about living in the moment. Marie Claire caught up with the actress on the eve of How to Get Away with Murder's new season premiere, which you can tune into tonight at 10|9c on ABC.

Marie Claire: What's been the best part of working on How to Get Away with Murder?

Aja Naomi King: I just really love spending time with these people and watching them work. Being next to Viola every single day and just being able to witness her process, how she analyzes things, and the rest of my cast mates… The amount of dedication they have for their work, even with the smallest moment, there's so much thought put into it. I really appreciate that: to walk into an environment where everyone is serious and dedicated to creating the best performance possible and challenging themselves to figure out the most interesting way to approach the work.

MC: You mentioned Viola Davis' process—which just resulted in her history-making Emmy win—what's it like?

ANK: She's really incredible, and she also allows herself to play around. Everything's not so serious all the time. Sometimes we do something and then pop out if it and come out laughing about something. I think we all feel like we can play, and it's not the end of the world if we do something and fall on our face.

MC: As one of the main students, your character is a driving force on the show. She's ambitious, mean, and a bit brown-nosed. Is she based on anyone you know?

ANK: [Laughing] My friends probably think my character is pretty similar to me. There are definitely a lot of similarities. Not so much on being a brown-nosed, but I am extremely ambitious. The character of Michaela is definitely something I can relate just because I've been very goal-oriented in my life, so I really understand someone like her, where you're on a specific path and you're not going to want anyone to deter you from it. So much happened to my character last year, she had to overcome so much, and she was still trying so earnestly to get her life back on track. So I think it'll be really interesting in this upcoming season to see where she is and all that we're going to learn about her, to see her try to pick up the pieces and move forward.

MC: What is it like to be on a show that's gotten so much attention for having a powerful female lead, as well as many roles for women of color, and portraying gay male sexuality in a more honest way?

ANK: It's so great. I think that's what we all want to do: to put a mirror up to the world and give our audience an accurate picture of what life is really like, so that you have varied and diverse characters. Being on a show with a female lead is amazing for me. I love that. I love the powerful woman who's complicated. There's no push to be one thing or another thing. It's all human. That's what you look for as an actor: characters written and portrayed in the most human way possible.

MC: You're starring in next year's The Birth of a Nation. Was shooting the film different from other acting experiences you've had so far?

ANK: Most definitely. It was more challenging, just in terms of the time period and the rules of that world. It's 2015, I can run around and do whatever I want. Stepping into the character of Cherry, her life's so far away from anything I've ever experienced. I had to take a deep breath before stepping into that. Even wrapping my brain around the idea that not only what I want does not matter to that world, but also, how does someone who is raised in a society where your wants and desires don't count, where you are maybe socialized into never hoping for anything better because this is the only type of life you know, how do you play that?

So I had to do a lot of digging to really figure that out. It was extremely challenging because, like I said before, I'm very ambitious, I'm very goal-oriented. If I want something, I go after it. So to play someone who didn't have to think for herself, would she even care to want something more, to desire something more? Would that thought even be cultivated in her, because of her circumstances of being a slave her entire life? That was really interesting to explore. There was a quiet defiance that the director and I had wanted to cultivate for her, even though that was the world she lived in. There was some part of her that would dare to hope and believe that there could be something better, that she and her family deserved something better.

MC: What else is coming up for you?

ANK: It's all been kind of a blur. I'm excited for our show to premier this week and to see how people react to it. I think the first episode is pretty amazing. I'm really excited to see and hear people's responses to it. I'm just enjoying my time with my fellow actors, enjoying this moment.

Lane Florsheim Features Editorial Assistant I'm the features editorial assistant at Marie Claire.
This content is created and maintained by a third party, and imported onto this page to help users provide their email addresses. You may be able to find more information about this and similar content at piano.io
Advertisement - Continue Reading Below
More From Celebrity
Chrissy Teigen Opens Up About Her Loss
A Look Back at Gwen Stefani & Blake Shelton's Love
Advertisement - Continue Reading Below
Serena Williams Shows Off Toned Body In BTS Photos
See a Romantic New Photo from Beatrice's Wedding
Harry Was Treated as a "Spare" by the Royals
Cardi B Called Out Racist Reactions to Her Birkins
Emily Ratajkowski Is Pregnant With Her First Child
Blake Lively Reacts to Gossip Girl's Identity
Harry Said He Didn't Understand Unconscious Bias
Joe Jonas Took a Stroll With Daughter Willa