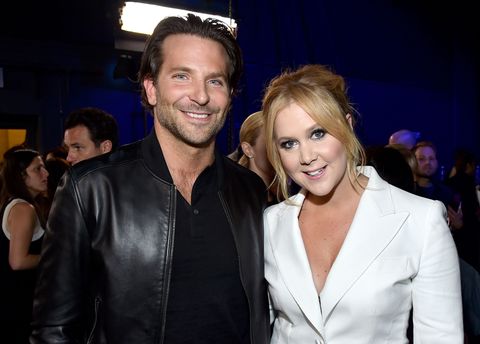 Amy Schumer knows how to play it. While hosting Saturday Night Live, the actress and comedian announced her "engagement" to Bradley Cooper, because that is exactly what you are supposed to do when given that much power.

Recalling the night she hung out with the actor, who apparently could not stop talking to her, she joked that it was a done deal. "I changed my Facebook status, because it's not complicated—I'm engaged to Bradley Cooper," she said.

Asked about putting a ring on it by Access Hollywood while promoting his new movie Burnt, the actor was a little bummed that everyone now knew about their betrothal. (Kind of takes away the specialness, you know?) "I thought it was gonna be a secret but she just decided to let the cat out of the bag," he said.

"I texted with her after," he continued. "I was like, 'That was hilarious.' "

Samantha Leal Senior Web Editor I'm Sam, the senior editor at MarieClaire.com.
Advertisement - Continue Reading Below
More From Celebrity
Ben Affleck Is Blond Now
A Timeline of Charles and Diana's Relationship
Advertisement - Continue Reading Below
Kendall Jenner Wants to Work for Beyoncé
Harry & Jon Bon Jovi Sing Together at Royal Event
Khloé Kardashian Is Being Trolled Over Febreze
A 'Friends' Reunion Special Is Coming to HBO Max
Katie Holmes Is in Head-to-Toe Chloé at Their Show
Ariel Winter Now Has Strawberry Blonde Hair
46 Stars Who Dated Before They Were Famous
Every Easter Egg in Taylor Swift's 'The Man' Video