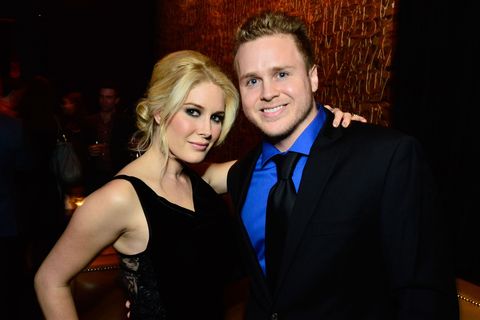 It's been five years since The Hills ended, and Spencer and Heidi Pratt are in the second act of the Shakespearean tragedy their lives have become. Missed opportunity. Familial feuds. Tequila-induced twerking. But at the same time, they've still got each other—and a sense that their next big break is just around the corner.

Here, we present the CliffsNotes version of their fascinating/sad new interview with Complex, featuring Spencer's hall of crystals, their almost-stake in the Kardashian dynasty, and a whole lot of margaritas.

They're thinking about having a kid and naming her Spider (if Spencer gets his way).

Unless they succeed in getting their own show, that is. "We were going to start trying this September, but I've been thinking a lot about it too and like, why am I in a rush? My real priority in life is my marriage," Heidi said. Plus they're already parents to four dogs.

They're stuck between continuing to play the characters that made them famous and keeping it real.

"You would rather us lie and deny that Heidi ever got plastic surgery?" Spencer asks. "Is that what you wanted? I would have loved to lie to everyone. All of these other celebrities get to do it all day long. Then everyone's like, 'Oh! What bra is it? So you just put the liner above the lip?'" Cough.

They're very aware of how the tables have turned for them and Heidi's former underling Kim Kardashian.

"If I got to watch Spencer and Heidi get murdered I would be like, 'Oh, I'm not going to do this.' Kim almost came out with a song. She used to call Heidi to organize Heidi's closet. Kim was edited out of Hills episodes organizing Heidi's closet. Now it's like, 'Kim Kardashian breaks the internet with her booty.' Like, what the fuck? That's real life for us."

"She can deny it if she wants, but she comes up to me and is like, 'Spencer, I want you to manage Kim.' I literally started laughing," Spencer said. "What is this lady talking about?" Kim's rep did deny it.

They insist Lauren Conrad made a sex tape with her ex-boyfriend Jason Wahler.

And neither of them has gotten over how they were portrayed on the show. Heidi: "Today, I would be like, 'Bitch, you know what you did." Spencer: "Lauren is a cold-hearted killer. That's what people don't get. She will cut you in your sleep. She tried to destroy us. If you want to throw missiles, I'm throwing a nuke. This is how I operate."

In their house, they've got a wall of every tabloid cover that mentions them and a room for Spencer's crystals.

Their covers—even the bad ones—are like Messi's trophies, apparently, and the crystals (citrine in particular) supposedly bring in money/act like a magnet for more crystals. "This one I'm convinced attracts other crystals," Spencer said. "That's why I got into collecting." *backs away slowly*

Chelsea Peng I'm Chelsea Peng, the assistant editor at MarieClaire.com.
This content is created and maintained by a third party, and imported onto this page to help users provide their email addresses. You may be able to find more information about this and similar content at piano.io
Advertisement - Continue Reading Below
More From Celebrity
Dolly Parton On the #FreeBritney Movement
Will & Kate Are Nervous About George's Future
Advertisement - Continue Reading Below
George Won't Be Forced to Go to Boarding School
Diana Would Have Written a Memoir Too, Friend Says
A Slice of Diana's Actual Wedding Cake Is For Sale
Matt Damon Trolled Ben Affleck and Jennifer Lopez
This Old Video of the Queen Saying "Nah" Is LOL
Diana Had a Secret Message on Her Wedding Shoes
Will's Friends Made "Jibes" About Kate's Mom
William Will Suffer "Worst" from Harry's Memoir