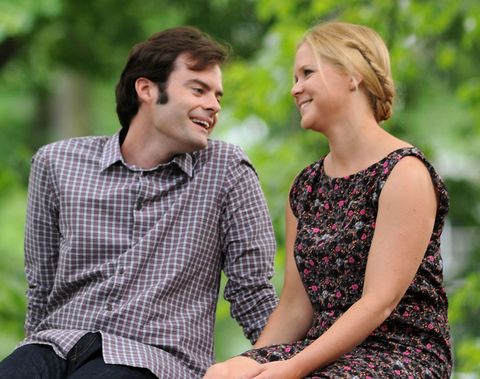 It's the Trainwreck alternate ending you never knew you wanted.

Amy Schumer's hit film wraps up in the best way ever: with her winning Aaron's heart thanks to an epic cheer performance. But we didn't get to see what comes next for the happy couple—marriage? Babies? More hang sessions with LeBron James? Sure, the implication was that Amy and Aaron lived happily ever after, but apparently Schumer's maternal instinct kicked in — at least in the film's alternate ending.

"I usually have a few final scenes shot, and I'm aware that the movie could end at one of two or three places," director Judd Apatow said of a clip featuring Aaron + Amy + a cute baby. "The moment where [Schumer and Bill Hader] talk and kiss after the cheerleading sequence was so great that we knew we couldn't top it. But it is always wise to shoot something with a baby. Who hates a movie that ends with a baby? Just Darth Vader."

Wise words. The alternate ending will appear on Trainwreck's DVD, but if you haven't owned a DVD player since 2008, you can go ahead and watch it here.