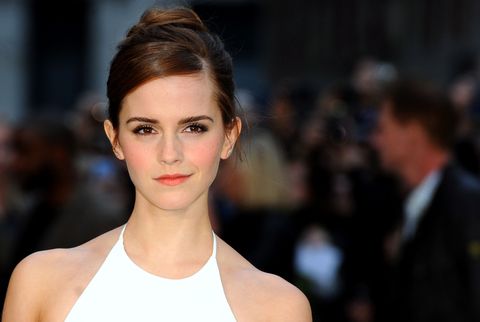 The 25-year-old actress played Hermione for a decade, and a hallmark of her character—at least according to JK Rowling—is "lots of bushy brown hair." Watson's own locks had to look the part for Harry Potter's film adaptation, and apparently she wasn't on board.

"When I see the images again from the first Harry Potter I immediately think how bad my hair was," she tells Vogue Italia. "It is always surprising for me, to see how long this period of time is, where I have come and from where I started. It is pleasant to follow that journey."

Hermione is often lauded as a strong role model who doesn't care about her looks when there important things to think about (house elf emancipation, anyone?), but let's not forget that Emma Watson isn't her character. Guess she wants her hair to be on point just like the rest of us non-wizards—which, to be clear, does not conflict with her feminist values.

Mehera Bonner Contributor Mehera Bonner is a news writer who focuses on celebrities and royals—follow her on Instagram.
This content is created and maintained by a third party, and imported onto this page to help users provide their email addresses. You may be able to find more information about this and similar content at piano.io
Advertisement - Continue Reading Below
More From Celebrity
Luna Adorably Crashed Chrissy Teigen's IG Video
35 Unforgettable Royal Wedding Scandals
Advertisement - Continue Reading Below
Kate Moss and Daughter Lila Walk Runway Together
The Queen Compared Her Appearance to Miss Piggy
Meghan Revealed Who She Leans on For Support
Who Is Alev Aydin, Father of Halsey's Child?
Surprise—Halsey Is Pregnant With Her First Child
Um, Why Is the Weeknd's Face Bloody and Bandaged?
Your First Look at Kristen Stewart as Diana
47 'Friends' Facts Every Superfan Should Know