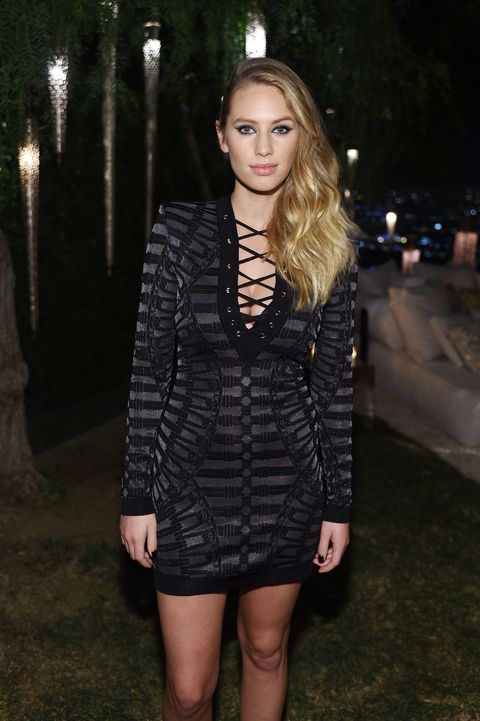 If Dylan Penn's name is familiar, it's because a) her parents are Robin Wright and Sean Penn, and b) it's synonymous with a new generation of models best defined by #SquadGoals. Like Kendall Jenner and Ireland Baldwin, Penn grew up (somewhat) skirting the spotlight of her famous family—but now she's making the move from modeling to film (and moving straight into the public eye) with her first feature, Condemned. We spoke to 24-year-old Penn about entering the industry, maintaining privacy in a world where sharing is caring, and how the Hollywood wage gap has affected her personally.

Marie Claire: The wage gap in Hollywood has been super buzzy thanks to Jennifer Lawrence writing that killer essay for Lenny Letter. As a young woman entering the industry, how does an essay like that influence your business decisions?

Dylan Penn: It's really interesting because I make my money through modeling, and I think that's the one business where mostly women get paid more and have more possibilities for jobs. It's very different from the film business, and I think it's ridiculous. It doesn't make any sense. Even my mom's show, House of Cards, it's so crazy that she's not getting paid as much as Kevin Spacey and they are both frontrunners. They both equally grab the attention of the audience. I mean, it's crazy. Once I'm in this for a bit longer, I'll definitely fight against that—I think Jennifer Lawrence's letter was very potent and much needed for girls in general.

"I think Jennifer Lawrence's letter was very potent and much needed for girls in general."

MC: There are so many women in Hollywood right now who aren't afraid to raise their concerns and speak their minds. Who do you look up to?

DP: I guess I'd have to say my mom. And I definitely respect people like Jennifer Lawrence and Amy Schumer—people who kind of make light of the situation. Besides that, anybody who takes roles that empower women, I tend to admire.

MC: Your parents' love lives have been covered in the media a lot lately, and you had to deal with the attention that came along with being linked to Robert Pattinson after he split with Kristen Stewart. As you enter the industry, is invasion of privacy something you worry about?

DP: No, I guess I haven't been so affected by it yet. That'll change eventually if my life is interesting to the public. But, I tend to lead a pretty private life and I have a lot of friends who are not in the business, so I don't tend to attract a lot of attention. It's something that you have to be aware of and I'm not an idiot—it comes with the territory. There's a point where it's too far, but if you're going into this business, you have to expect it.

MC: Do you feel pressure to portray yourself as a "role model," or do you not worry about it?

DP: I definitely take that into consideration. If you're out there in the public eye, you should always look to empower girls and be a good role model. There are a lot of things I do for myself—I'm not going to base all my decisions on being a good role model. But I think being in my position, just working hard, taking good roles, and doing a good job is in itself a good way to start.

"There are a lot of things I do for myself—I'm not going to base all my decisions on being a good role model."

MC: When Instagram star Essena O'Neill quit social media a few weeks ago, she revealed the "truth" about her photos. Basically, that they're false representations of her seemingly perfect life. Do you worry about portraying a certain lifestyle in your own Instagram?

DP: I don't own my social media. I have my private Instagram which is just shared with my friends, and then my agent runs my public Instagram, which I see once in a while. I don't care what people think about me to be perfectly honest. I think mainly the reason I have the public Instagram is for jobs. That's part of what gets you jobs nowadays in modeling or acting.

MC: Finally, a super important question: you have a great natural beauty look. Can you tell us some of your favorite skin care products?

DP: To be honest, I buy most of my stuff from the drugstore. I love Neutrogena. I don't really spend too much money on skin care—one thing that I do use is coconut oil constantly. I think that just saves your skin and makes everyone look like they're glow-y even if they're not.