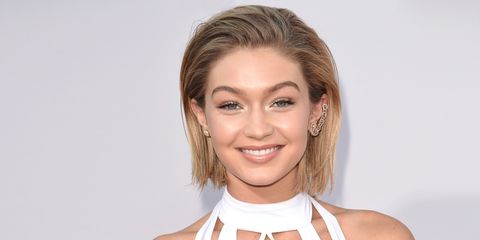 There are fake celebrity lobs and then there's this. This, friends, is a Grade A Certified Black-Diamond-Level Fake Celebrity Lob. Allow me to explain.

Gigi Hadid stepped onto the 2015 American Music Awards red carpet and dropped jaws not just because of her strategically cut-out dress, but because the long-haired model—she of the recent Victoria's Secret waves—had chopped off her famous locks.

Or *had* she. The star told Giuliana Rancic during E!'s red carpet broadcast that "you can check back tomorrow to see if I have short hair...there's tricks of the trade." Which confused the hell out of internet editors such as myself, who were frantically zooming in on red carpet shots going "but wait, that's the end of her hair, right there. I see the end. So how could this be one of those fold-hair-under situations? And there's no lace at the hairline, so how could it be a wig? WHAT DOES SHE MEAN THIS ISN'T A HAIRCUT?"

A glass of wine later, it came to me. Here, look:

See the hair in front of her ears, how it's being pulled straight back over and *behind* her ears? And then how the hair that's falling down, with the visible ends, is different hair? That ear area is the secret—that's where you can see that the majority of her long hair is being pulled back and hidden at the base of her neck (maybe in pincurls? Something very low-profile? There might be a partial wig back there too, for volume and more short hair in the mix). Then the layer on top of it all, covering everything, has been trimmed to chin length.

SEE? MAGIC. Just wait 'til tomorrow, when she's got long hair again—and, of course, a chin-length top layer. JUST WAIT. I'll be here with the wine.

Update: I was right! Per Hadid's hair stylist Bryce Scarlett, what you see in the front and on top is her actual hair, styled with Matrix StyleLink products. Her longer strands have been pulled back behind her ears and hidden under a half wig. "It was Gigi's idea!" he says.

Jessica Pels Editor-in-Chief As the editor of Cosmopolitan, Jess oversees the editorial for all of Cosmo's efforts across print, digital, video, and emerging platforms.
This content is created and maintained by a third party, and imported onto this page to help users provide their email addresses. You may be able to find more information about this and similar content at piano.io
Advertisement - Continue Reading Below
More From Celebrity
Simone's Boyfriend Sent Her the Sweetest Message
What Happens on Katie's Season?
Advertisement - Continue Reading Below
Rebel Wilson Recreated This Britney Spears Look
Jennifer Lopez Flew Back From European Getaway
Jennifer Lopez Wears Old Bracelet From Ben Affleck
Simone Biles Cheers on MyKayla Skinner
See the Royals Socialize at a 1991 Cocktail Party
Eugenie Posts Pics from Harry & Meghan's Home
Queen Trolled Tourists Who Didn't Recognize Her
Blake and Ryan Recreated Their First Date on IG