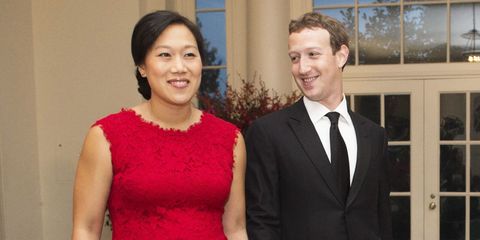 One of the richest babies on Earth has just been born—but that might not be the case for long.

Facebook founder and CEO Mark Zuckerberg just announced that his first child, a daughter named Max, has entered the world. He also announced that he and his wife, Dr. Priscilla Chan, are going to donate 99% of their Facebook shares to charity. That's worth a whopping $45 billion dollars at today's valuations. In the announcement, which he shared (naturally) on Facebook, Zuckerberg said that his fortune will be aimed at "improving this world for the next generation." That will take the form of investments in technology, education, and healthcare.

Ever the power couple, Chan and Zuckerberg used the birth of his adorable daughter to also announce a brand-new charity, the Chan Zuckerberg Initiative. In a Facebook video (duh), they talked about the real issues facing the world, all while giving a rare look into their adorably dorky romance—and their mop-like dog, Beast. It appears like it will be a millennial version of the Bill and Melinda Gates Foundation, setting Zuckerberg up for whenever he decides to step back from Facebook. "I will continue to serve as Facebook's CEO for many, many years to come, but these issues are too important to wait until you or we are older to begin this work," he wrote.

Chan, a pediatrician by trade, is particularly interested in education reform; she has started a group called The Primary School, which integrates health and education for kids and families in the Bay Area. "[Max] and everyone in her generation really should be able to live much better lives than we can in all these ways, and I hope that not just our child, but everyone in our community has an opportunity to go on an have a bigger impact in the world," Zuckerberg said. "I think she'll get there." With parents like these, there's no doubt.