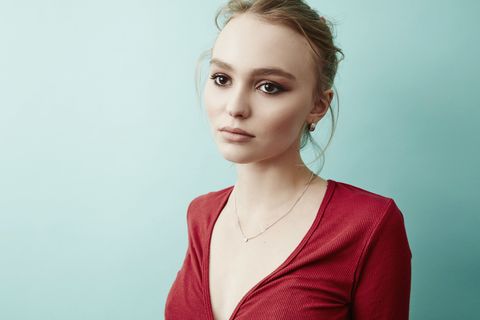 When Lily-Rose Depp posted a photo of her involvement in LGBT activist iO Tillett Wright's photo series Self-Evident Truths, the internet (not us!) prematurely shouted "She's gay!" But that wasn't exactly the 16-year-old actress's intention, she said in a recent interview with Nylon.

"That was really misconstrued, that whole thing. A lot of people took it as me coming out, but that's not what I was trying to do. I was literally doing it just to say that you don't have to label your sexuality; so many kids these days are not labeling their sexuality, and I think that's so cool…It's so fluid and there's so much pressure on kids to label themselves and say, "This is what I am, this is what I like."

And in keeping with her "you don't have to pick something and stick with it" stance, Depp is refusing to categorize herself. "It's not anybody's business, because I am going to date whoever I'm going to date. I was just saying, kids don't need to label their sexualities. It's not that big of a deal." 👏

Chelsea Peng I'm Chelsea Peng, the assistant editor at MarieClaire.com.
This content is created and maintained by a third party, and imported onto this page to help users provide their email addresses. You may be able to find more information about this and similar content at piano.io
Advertisement - Continue Reading Below
More From Celebrity
What Happens on Katie's Season?
Gigi Shared the Sweetest Photo of Zayn and Khai
Advertisement - Continue Reading Below
Meghan Shared the Cutest Update About Archie
Meghan's Heartfelt Father's Day Gift for Harry
Sophie Turner Shared a Sweet Unseen Pregnancy Snap
The Queen Has a Collection of Dog Toys for Sale
Meghan Revealed the Nod to Diana in 'The Bench'
Celebs Are Posting Tons of Father's Day Tributes
Will Spent Father's Day with George and Charlotte
Charles Won't Allow Archie to Become a Prince