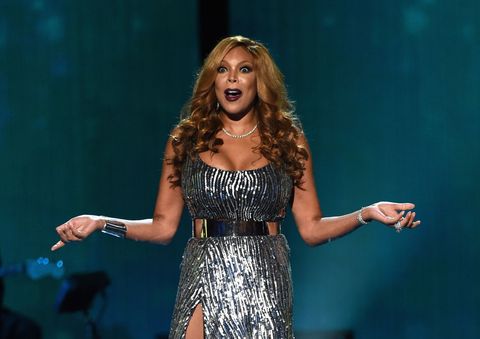 Here's an idea: Instead of going on TV to blame a woman's alleged sexual abuse on the woman herself, Wendy Williams might take some time off to watch Law and Order, which science has proven to help people better understand consent and not blaming the victim.

But instead, here's what happened: During an episode that aired Monday, Williams wrote off Kesha's accusations against Dr. Luke as a ploy to exit her contract. "Unfortunately business is business, and it sounds like it's fair," Williams said of the court ruling. "If everybody complained because somebody allegedly sexually abused them and was ripping them off, then contracts would be broken all the time."

It only got worse from there. "Number two, if she and her mom are so close—Kesha's no spring chicken. I mean she's like, 30 years old or something like that? So she wasn't stupid 10 years ago and neither was her mother. When the sexual abuse—alleged sexual abuse—started, why weren't they rolling camera on it? You know, a camera up in the wig?"

Hoooo boy. This has to be seen to be believed, so start the clock at 4:21 to catch Hurricane Wendy.

Chelsea Peng I'm Chelsea Peng, the assistant editor at MarieClaire.com.
This content is created and maintained by a third party, and imported onto this page to help users provide their email addresses. You may be able to find more information about this and similar content at piano.io
Advertisement - Continue Reading Below
More From Celebrity
How Much Did Prince Harry Inherit From His Mother?
Amanda Gorman Says a Security Guard "Tailed" Her
Advertisement - Continue Reading Below
Meghan and Harry Share a Sweet Home Video
Harry Left Royal Family Due to "Lack of Support"
Why Prince Harry Asked the Royal Family for Help
Prince Harry: "I Think My Mum Saw It Coming"
Prince Charles "Stopped Taking" Harry's Calls
Harry & Meghan's Tell-All: Everything You Missed
Meghan and Harry's California Home: What We Know
Meghan Markle Is Having a Girl This Summer