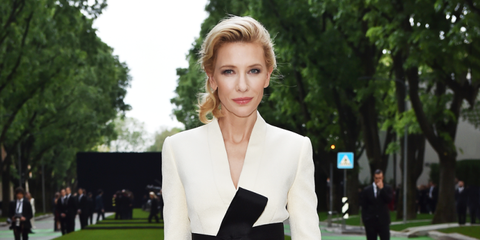 At a recent event to celebrate the launch of SK-II's new line, Cate Blanchett apologizes for having a head cold. She can't shake anyone's hand and she's sniffling, but even still the actress looks *flawless*—something she attributes in part to her consistent use of SK-II's products. As the brand's Global Ambassador, Blanchett is participating in SK-II's new #ChangeDestiny campaign, which is meant to empower women around the world to affect their own circumstances. We spoke with the actress about her skincare preparation around the awards weekend, her Oscar-nominated acting work inCarol, and why Hollywood still needs to solve its gender problem.

Marie Claire: Is there any sense of relief that awards season is coming to an end?

Cate Blanchett: Yeah. I do tend to move on anyway. This is a part of my life, but it doesn't rule my life. So I dip in and out.

MC: What sort of preparation do you do for a big awards show like the Oscars?

CB: Well, this SK-II skincare. I happen to have it here! Look, it does seem convenient, but it works. And sleep. Often with these things—because I don't live here—I fly in the morning of. But this time I had to do a little bit of work. So I've had the gracious moment of having a little bit of space around the event this year. But I try and sleep.

MC: You've flown in the morning of the Oscars?

CB: Yeah! I have children. I've also left the night of. There was once where I was nominated and I was in a play in Sydney and left straight after the performance. When I got in, because you gain time, a bit like Dr. Who and the Tardis, I went straight to the theater and to the stage.

MC: Do you have a ritual or a superstition you follow before an awards show?

CB: I'm not a particularly superstitious person. I started off being one when I started onstage and I thought, I'm going to end up in a mental institution if I do this. Because I can become really really OCD. But in the lead up, if I know I've got a couple of events coming up or making a film, I prep. You do get scrutinized in the digital age. You know they're zooming in on every pore, which you've got to forget about. And I do forget about it because I feel my skin's in good shape. I'm the age I am, but my skin is in pretty good condition because I've been consistent with my skincare. I'll use the facial treatment masks before an event and have a bath, because anything you can do to relax. When you walk that red carpet it's big so anything you can do to feel relaxed in those environments.

"I think often women can feel isolated and feel like they get into a rut and don't quite know how to get out of it."

MC: What do you like about the concept behind SK-II's #ChangeDestiny campaign?

CB: I think often women can feel isolated and feel like they get into a rut and don't quite know how to get out of it. So the message behind it is that feeling of self-empowerment, working with what you've got and doing the best you can. And that's why the Internet is so fantastic and launching an idea like this on the Internet is so great, because there is a network. You can hear other people's experiences, people who you think, Well, they're successful in their career. You realize, in fact, there's a road of doubt. There's many many forks in the road, many failures, many moments of despair along that way. I feel like right now I'm at a fork in the road.

CB: Yeah, you think, Well, what is my next challenge? Do I keep moving down the path that looks safe and obvious, or do I go down that path that looks slightly more murky and scary? And I think I'll probably go down that murky, scary path of unemployment. I do like that message of self-empowerment.

CB: I think you need to have a healthy sense of doubt because I think doubt leads to inquiry. Inquiry and curiosity is really important in any profession, but definitely in what I do. And in parallel you also need to be confident enough to try things. So it's a tricky thing sometimes to balance those two states.

MC: Why did you want to work with director Todd Haynes again on Carol? It's such a different role than when you played Bob Dylan in I'm Not There.

CB: That speaks to his love of what actors can do. He asks actors to such interesting things and so when you're asked to do something interesting and you're not asked to do the same old stuff, then actors lap that up. I certainly do. He's such an influential filmmaker. I do find it bewildering that the costumes, two actresses, the cinematography, the screenplay, the score were nominated on Sunday, but Todd hasn't been. And without him there would be no film.

MC: Do you think Carol failed to get a Best Picture nomination because it feels like a more feminine film than some of the others?

MC: Did you learn anything about your own womanhood making the film?

CB: I never really think about my gender, first and foremost—until a door is closed to you. Until you can see a parallel opportunity with a man in a similar place in his career and you think, That opportunity is not open to me or my fellow actresses. That's interesting. But I don't think about myself with gender first and foremost. So I didn't think of Carol as being first and foremost a gay woman. I thought about her as being a woman who was experiencing a volcanic love that was forbidden, a la Romeo and Juliet. Whenever I play a role, whether it's onstage or screen, I'm always interested in points of difference. If there's any similarities or anything I can take away I think that happens inadvertently. But I did think a lot about Patricia Highsmith and how personal the book The Price of Salt was to her and that it was written under a pseudonym and the difference for a gay man, which of course homosexuality was illegal at the time the film was set. There wasn't even a name for Sapphic love between women at the time. It was more considered hysteria. It wasn't even accorded the status of being illegal. You were simply put on pills or given electroshock therapy. So I did think about the incredible bravery and sacrifice that Carol had to make.

MC: Last year Hollywood started to address the gender pay gap. What is the next big female issue they should tackle?

CB: Oh, the pay gap is still there! The thing is that these things are not fashionable. The lack of racial diversity and gender diversity and the lack of female directors—those are not fashionable issues. And they're not issues that reside solely within the film industry. It's a pandemic. Any industry loses its innovation and loses its access to creative juices if you don't have progressive thinking and diversity. There's a group that's all about raising gender diversity on company boards. If you don't have people at the top making progressive decisions, and thinking about their audiences—we're 50 percent of the population watching film. This is the thing too about Carol. There's still somehow this conservative thinking that it's a woman's film, but there's lot of men who've gone to see it and been so moved by it. It speaks to the human experience and it's an impeccably made film by Todd Haynes. Period. Like, I would go and see The Danish Girl and I don't think that because there's a man in it it's somehow a man's film. Or I don't look at Mad Max and think it's a man film. But somehow there's this trench before people will pick up the DVD and watch Carol. It's just lazy thinking and lazy thinking is not creative or productive.

MC: Are you looking to direct films?

CB: I have in the theater. I'd love to eventually, but I also have four children and my husband has a career and directing does take a lot of time and preparation. But I would certainly love to see more female directors recognized at the Academy Awards.