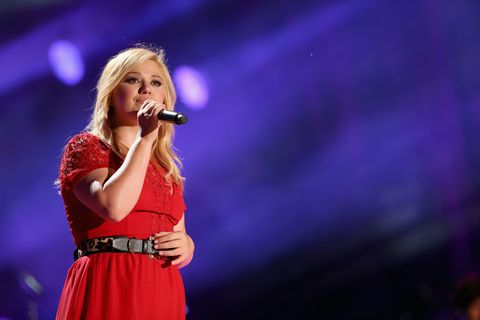 Kelly Clarkson is #TeamKesha, and is giving all the help she can to support the 29-year-old singer after courts ruled not to let her out of her Sony contract. Although Clarkson makes clear that she does not know the intricacies of Kesha and Dr. Luke's relationship (and subsequently, the abuse allegations), the singer has worked extensively with Dr. Luke and "can remark on his character."

Describing the 42-year-old producer as "not a good person," 33-year-old Clarkson came forward on Australia's Kyle and Jackie O radio show today to say that she is not a fan.

"I've run into a couple of really bad situations, musically. It's really hard for me because he'll just lie to people, and it makes the artist look bad," she said, according to Us Weekly. "He's kind of difficult to work with and kind of demeaning. It's kind of unfortunate."

The singer, who collaborated with Dr. Luke on hit tracks like "Since U Been Gone" and "Behind These Hazel Eyes", claimed she was also "literally blackmailed" by her label to work with him on the 2009 track "My Life Would Suck Without You."

"They were like, 'We will not put your album out if you don't do this," she added. "It was a really hard time for me. And I tried to make the best of the situation."