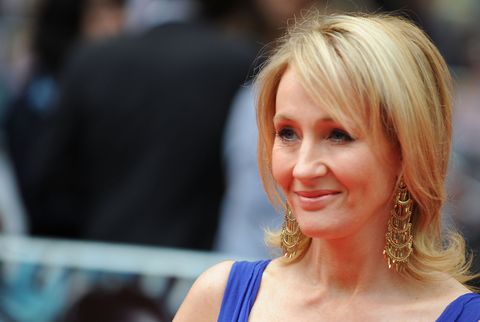 Muggles the world over rejoiced when news of J.K Rowling's The History of Magic in North America was announced, but things are getting sliiiiightly iffy due to Rowling's take on Native American Skin-walkers.

Native Americans are obviously a huge part of North American history, but is filing an entire community's belief system under "magic" appropriate? And furthermore, is it Rowling's place as a white woman to write a fictional account of a culture she's presumably pretty unfamiliar with? Maybe not.

Native Appropriations writer Dr. Adrienne Keene voiced concern in a lengthy post to her website, saying, "We're not magical creatures, we're contemporary peoples who are still here, and still practice our spiritual traditions. Traditions that are not akin to a completely imaginary wizarding world (as badass as that wizarding world is)...I get worried thinking about the message it sends to have 'indigenous magic' suddenly be associated with the Harry Potter brand and world."

It's not "your" world. It's our (real) Native world. And skin walker stories have context, roots, and reality. https://t.co/mRZD0M1UCf

Rowling's story concerning skin-walkers is up on Pottermore, and the results will doubtless be cause for further concern:

We're delighted to reveal piece one of 'History of Magic in North America' by @jk_rowling: https://t.co/EEdMJDtIfA pic.twitter.com/TNtJQwIp1z

"The legend of the Native American 'skin walker'—an evil witch or wizard that can transform into an animal at will—has its basis in fact," she writes. "A legend grew up around the Native American Animagi, that they had sacrificed close family members to gain their powers of transformation. In fact, the majority of Animagi assumed animal forms to escape persecution or to hunt for the tribe. Such derogatory rumours often originated with No-Maj medicine men, who were sometimes faking magical powers themselves, and fearful of exposure."

What's worrisome here is that people who aren't familiar with Native American culture could be confused about whether Rowling's writing fact or fiction, and she muddles the issue by using phrases like "the Native American wizarding community."

"The Native American wizarding community was particularly gifted in animal and plant magic, its potions in particular being of a sophistication beyond much that was known in Europe," Rowling continues. "The most glaring difference between magic practised by Native Americans and the wizards of Europe was the absence of a wand."

Fans have asked Rowling via Twitter to reassure them that she worked closely with the Native American community before writing this story, but she has yet to clarify.