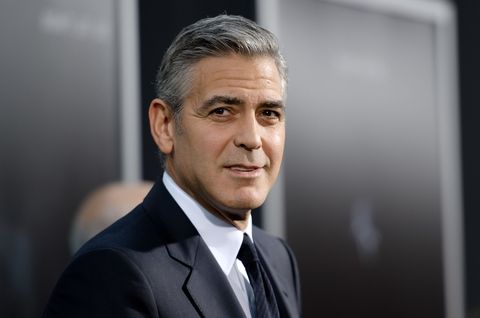 America is a country filled with immigrants from all over the world, yet the anti-immigration rhetoric is at an all-time high (high, like Trump's proposed wall...ahem). If mistrust and aversion to immigrants sounds hypocritical, it's because it 100 percent is—something George Clooney pointed out while visiting a group of Syrian refugees in Berlin.

"I'm of Irish decent," Clooney said during a meeting organized by International Rescue Committee. "And in America, a hundred years ago, we were refugees. My family. Irish were treated terribly in America for a period of time, and not accepted. America learned to accept all of these ideas. It's what our country is, is a country of immigrants. And we have not recently done a very good job of remembering who we are."

George's wife, barrister Amal Clooney, also spoke about her family's history. "My own family's from Lebanon, and they also ran away from a war and were lucky enough to be accepted by a European country in 1982 when the violence there was really bad," she said. "Many years later, everyone is doing  well. My father has returned to Beirut. I hope that as you say, you will be able to go back to a safe and free area."

George ends the above video by pointing out that refugees aren't just numbers in a newspaper—they're real people trying to escape real violence: "We always look around at the end of these tragedies and say, 'If we knew, we would have done something.' The reality is, of course, we know."

When a man who spent six years starring on ER is making more sense than many of our political leaders, you know there's a problem. George for president?

Mehera Bonner Contributor Mehera Bonner is a news writer who focuses on celebrities and royals.
This content is created and maintained by a third party, and imported onto this page to help users provide their email addresses. You may be able to find more information about this and similar content at piano.io
Advertisement - Continue Reading Below
More From Celebrity
Harry Met With the Queen At Least Twice in the U.K
Alexis Is Happy to Be Known As "Serena's Husband"
Advertisement - Continue Reading Below
Marc Anthony Supports J.Lo Amid A-Rod Split
The Palace Just Shared Prince Louis Birthday Pic
Meghan and Harry Talked Every Day During UK Trip
J.Lo Wishes A-Rod's Daughter a Happy Birthday
Irina Shayk Shared a Rare Photo of Her Daughter
John Travolta Talked Dancing With Princess Diana
Meghan Markle and Archie Speak to the Queen
Who Is Alexandria Ocasio-Cortez's Partner?