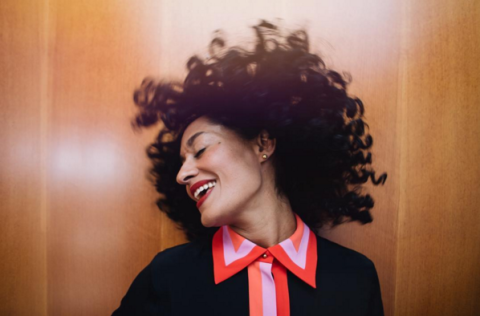 Watching Tracee Ellis Ross give pretty much any interview takes you through three main trains of thought: 1) Man, she is hilarious. 2) Oh, cool, she *also* loves doing voices (#NotAlone). 3) Is she that amazing in person? So it makes total sense that upon actually meeting her, all three were confirmed by yours truly. The Black-ish star is hilarious but also insightful, which is especially evident as our conversation arcs from our love of french fries to diversity in Hollywood to her new partnership with Special K for the "Nourish Your Next" project, a campaign designed to recognize and celebrate ready-for-what's-next women. Here, our chat. (I left out the part where we make voices while eating Special K, because no one needs to be subjected to that.)

Marie Claire: This new campaign is kind of brilliant, especially given that it seems all us women are constantly on the move and providing for others. What made you interested in the partnership?

Tracee Ellis Ross: It was a very clear and quick interest, let me tell you. To be given the opportunity to recognize and celebrate women and all of the extraordinary stuff that we are doing seemed like a perfect match for me. And I think Nourish is a really extraordinary and beautiful word, and being able to understand the fuller concept of nourishing your soul—not just making ti about the food that you put in your body, but about nourishing who you are as a person, and how you become *that* woman and that person you want to be—it was a really easy and smart match for me. I was like 'Oh, of course.' And by the way, it doesn't hurt that the cereal is *really* good. [laughs]

MC: And talking about kind of nourishing yourself–is there anything you do to treat yourself?

TER: I'm a really big believer in self care. One of the ways I nourish my soul is I eat the way I live my life—joyfully. So I like to choose foods that not just feel good in my mouth but in my body, and activities and make choices that really make me feel joyful. So I like to get my 8 hours of sleep, which is a luxury in the business I am in, most of my alarms go off at 4:30 a.m.—which means I have to be diligent about getting my sleep. But the truth is, is that it's a bit of a treat. As are potato chips, but surprisingly, those actually work for me—as a treat, I mean. Whereas a piece of cake, while it feels great in my mouth, by the time it hits my stomach I'm a little bit like, 'I want a nap!', you know what I mean? But french fries and olives, those are like fancy treats, and I will often go to a 7-11 and get myself a nice bag of potato chips. Or a selection of a bunch of the smaller bags—like a pu pu platter of potato chips.

But there are a ton of foods that are great for you, that's like an indulgence. I personally am a huge fan of fruit—I feel like that's God's candy, top of the line right there. I'm a farmer's market girl, so if you go and get beautiful, fresh fruit, that's local, and it hasn't been frozen yet, it's pretty fantastic. I'm a big TV watcher, too. That's a big treat for me.


MC: What are your go-to shows?

TER: There are so many! I watch so much stuff. Vikings I save for the iPad when I travel. Walking Dead. I'm still a big watcher of The Good Wife. I watch this teeny little show called Black-ish...

TER: Tiny. And the one who plays the mom, on there. She is something special. But in seriousness, I was a Downton Abbey girl. I'm a big fan of John Oliver. He's fantastic. Come on! Gosh what else, I DVR so much...Oh and Broad City! I am literally obsessed.

TER: Exactly! Exactly. And I do a guest star spot—it's coming up!

MC: When? And who do you play?

TER: I die. I die. When they called, I was like, 'We have to make this happen!' I will just say that I am a flight attendant. But I literally would have been a one-liner on that show, just to say that I was on it.


MC: Now, speaking of your show—there's been such a huge emphasis lately on pushing for not only diverse casts in shows, but diverse writing rooms, producers, directors...How have you seen the industry change?

TER: You mean how have I seen the industry *wake up* and try to represent the world that we live in? Thank God we're getting there. I mean, I think television is doing a better job than films in terms of representing people, but television is still not diverse. It just has some shows with different characters. It's just so strange to me, especially living in New York, but really—our world is very diverse. And not just by race—gender, sexual orientation, so many things—all of us exist. There are different sizes of people—imagine that, we're different sizes! Like, I love the Sports Illustrated cover with Ashley Graham or Barbie, let's talk about Barbie changing—I mean, thank goodness, we're all waking up. But sometimes I feel like art is supposed to mirror life, but strangely it's as if art is trying to catch up to life, to a certain extent? So, you know, I don't know what people are doing.

MC: In terms of TV and representation, your show does a great job in kind of illuminating the realities of life—let's take for example the "Hope" episode, where your character Bo and her husband Dre (played by Anthony Anderson) are discussing if they should let their kids watch the news covering police brutality. Going into that scene, were you concerned about how it would turn our or hyper-aware?

TER: No, I wasn't concerned so much because I have a lot of trust in our writers and the guy who created our show [Kenya Barris] and the tone of our show and what we're doing—I have great respect for him and trust in him. It doesn't ever feel scary to me or anything like that because I'm not playing myself—maybe if I were playing myself on television I would have sort of a different sense of worry being portrayed a certain way, but I really love what we're doing, and I think the police brutality episode along with a lot of other heavier topic episodes that we've done, what I like is that they're really based in these characters and who this family is, as opposed to sort of trying to say something. It's really a show about an American family and these are some of the topics that come up—for all of us, in different ways—and we get to see how this family is walking through it.

"Black-ish is really a show about an American family and these are some of the topics that come up—for all of us, in different ways—and we get to see how this family is walking through it."

MC: What's next for you? What's coming down the pipeline?

TER: I'm hosting Black Girls Rock again this year, and we have some wonderful nominees that I'm really excited about—Rihanna, Amandla Stenberg, Shonda Rhimes, and then in all fairness the main thing for me is—sleep. We've done 24 episodes, two years in a row, and it's been really exciting and fun, but it's time for a rest.