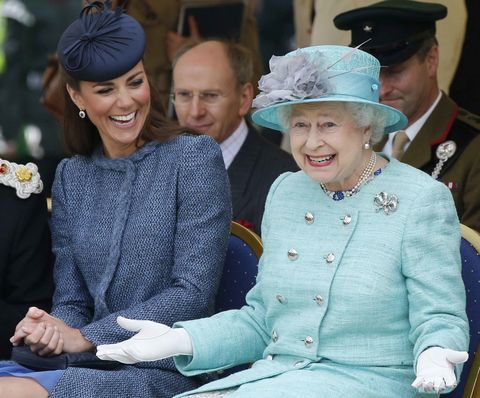 "I can remember being at Sandringham, for the first time, at Christmas. And I was worried what to give the Queen as her Christmas present," said the Duchess of Cambridge in the same TV special in which she reveals Prince George's nickname for his grandmother, according to the Telegraph.

"I was thinking, 'Gosh, what should I give her?' I thought back to what would I give my own grandparents. And I thought, 'I'll make her something.' Prince William had already written a nice essay about her and claimed the potholder (JK), so her "granny's recipe of chutney" it was.

"I was slightly worried about it, but I noticed the next day that it was on the table," said. "I think such a simple gesture went such a long way for me and I've noticed since she's done that on lots of occasions and I think it just shows her thoughtfulness, really, and her care in looking after everybody."

Awww. Maybe Ol' Lizzy was like "It's the thought that counts" when Kate handed her that jar of boiled-down fruits and vegetables, but you know—she did owe her one for the wedges.

Chelsea Peng I'm Chelsea Peng, the assistant editor at MarieClaire.com.
This content is created and maintained by a third party, and imported onto this page to help users provide their email addresses. You may be able to find more information about this and similar content at piano.io
Advertisement - Continue Reading Below
More From Celebrity
Harry Said the Queen and Philip Were "Adorable"
Kate Middleton Played Tennis With Emma Raducanu
Advertisement - Continue Reading Below
Tom Felton Collapsed on a Golf Course
Ashley Olsen Made a Rare Red Carpet Appearance
Harry Carries Briefcase That Reads "Archie's Papa"
Meghan Markle and Prince Harry Arrive in NYC
Kate Middleton Looked Radiant in Cream
People Are Convinced Kylie Is Having a Boy
Kim Kardashian's Met Gala Ponytail Cost $10K
Megan Fox and Kourtney Posed for Sexy Skims Pics