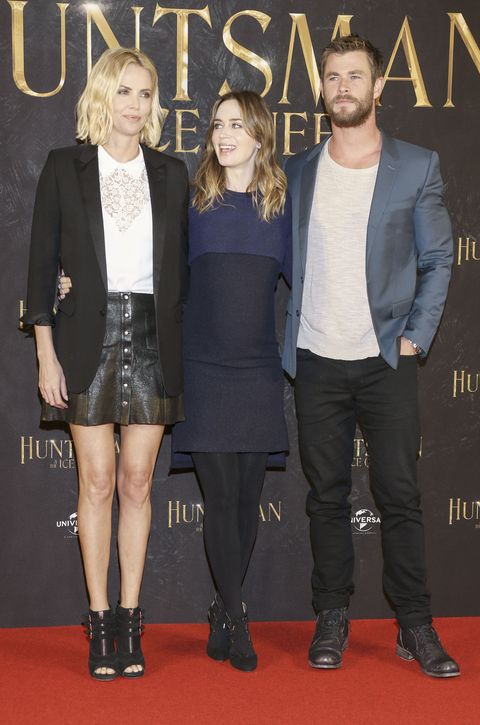 It is highly probable Donald Trump doesn't concern himself with any news that doesn't directly involve him, but if he did, he would know that being an ally to women makes you way more popular than if you were to be like "Oh, I said all that stuff because I didn't know it would come back to haunt me." Just look at Chris Hemsworth.

Not that he needs any help in the likability department, but when the Radio Times straight-up asked if he considers himself a feminist, he gave the answer we all want to hear.

"Oh yeah, for sure," he said. "My mum's a big feminist. I think that my views on things, as far as respect for women and so on, came from my mum. My dad has a very balanced and respectful view on a lot of things too. They were huge positive influences in my life."

Then he went on to talk about what it's like starring in The Huntsman: Winter's War alongside three badass female leads, two-thirds of whom have magical powers and want him dead.

"I think the balance has been tipped for a long time heavily in the men's direction," he said. "There are seven to eight male superheroes and one female in there. This is the opposite…But it's a funny conversation to even have, because of course it should be that way. Of course it should be equal."

Chelsea Peng I'm Chelsea Peng, the assistant editor at MarieClaire.com.
This content is created and maintained by a third party, and imported onto this page to help users provide their email addresses. You may be able to find more information about this and similar content at piano.io
Advertisement - Continue Reading Below
More From Celebrity
Ben Affleck and Jennifer Lopez Made Out in NYC
Lady Gaga Stunned in an Old Hollywood Look
Advertisement - Continue Reading Below
Olivia Rodrigo Looked Jaw-Droppingly Beautiful
Will's "Alleged Bullying" Drove the Sussexes Out
Sam Asghari Opens Up About Britney Documentaries
Prince Harry’s Memoir Is Concerning Royal Insiders
Meghan Markle Wore Some Familiar Earrings in NYC
Harry and Meghan Could Visit England for Christmas
Meghan Markle Looked Gorgeous at Global Citizen
Harry and Meghan Are Taping Their NYC Trip