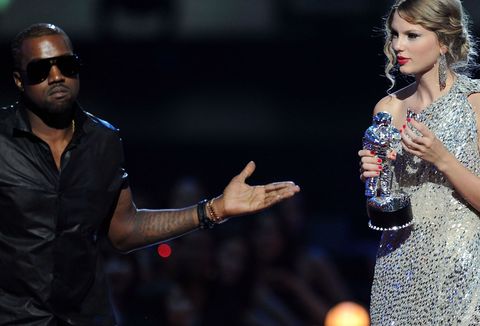 You'd think after dropping the lyrics "I feel like me and Taylor might still have sex" (oh, and also "I made that bitch famous"), Kanye West would, you know, maybe not talk about her anymore. But nope, apparently he has so much more to say.

After performing "Famous" during a show in Manila, Philippines, Kanye insisted that he "just said what everybody else was thinking" when he interrupted Taylor at the VMAs (aka the start of their "feud")—and that that "night when I went on stage was the beginning of the end of my life."

This seems pretty dramatic, but okay, let's go with it.

Look, we're all about Kanye controlling his truth, but ten-time Grammy winner Taylor Swift definitely got famous all on her own and she definitely deserved her moment in the spotlight at the VMAs. Just ask Beyoncé.