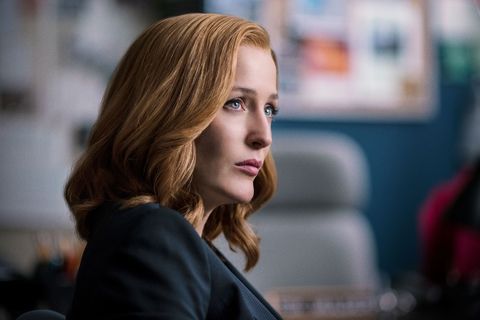 Now that Daniel Craig is washing his hands of 007, it's time for the world to crown a new James Bond. And as much as we'd love to see either Tom Hiddleston or Idris Elba take on the iconic role, it'd be even cooler to see it go to a woman. Specifically, Gillian Anderson.

The internet launched a quiet campaign to have Gillian become "Jane Bond" (ha ha, get it?), and she seems fully on board. At least judging from this giant imaginary poster she tweeted.

It's Bond. Jane Bond.
Thanks for all the votes! (And sorry, don't know who made poster but I love it!) #NextBond pic.twitter.com/f8GC4ZuFgL

Look, we all know that Bond will inevitably be a dude (because #ThePatriarchy), but campaigns like this at the very least bring some awareness to how ridiculous it is that women aren't even considered for these roles. There is zero reason why Jane Bond wouldn't kick just as much ass as James Bond, and it certainly wouldn't be the first time a role was re-imagined for a female (look at Sandra Bullock in Our Brand Is Crisis). Make it happen, world.