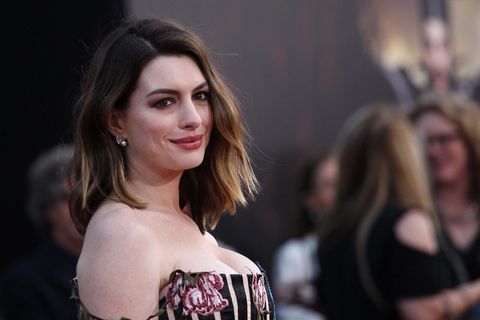 Remember when Anne Hathaway came in like a wrecking ball during Lip Sync Battle and you were like "holy hell, Anne Hathaway is everything, and she's been everything this entire time." Well, the Oscar-winner just took it up a notch by partaking in a rap battle against James Corden and totally slaying. But before we get to Anne's rhymes, let's give poor Corden a moment of recognition, because he had a few good disses:

1. "I'm gonna try my best and air it out like tank tops, and like her movie Get Smart, her rhymes are gonna flop."

2. "Now it's her turn to try and act a little scary, 'cause the only Catwoman I acknowledge is Halle Berry."

3. "This isn't just for me, it's for the whole U.K. Mad at your awful British accent in the movie One Day."

Cute, but guys. ANNE. Read her best burns below, and then watch the full clip if you can handle the heat.

2. "Now that I finally have a chance to speak, I saw your rhymes are like your ratings, damn, they're incredibly weak."

3. "You look like a KFC bucket with a lot of extra breasts."

4. "Google James Corden it says 'hopefully dead.' I'm like your wife: I watch Seth Meyers instead."