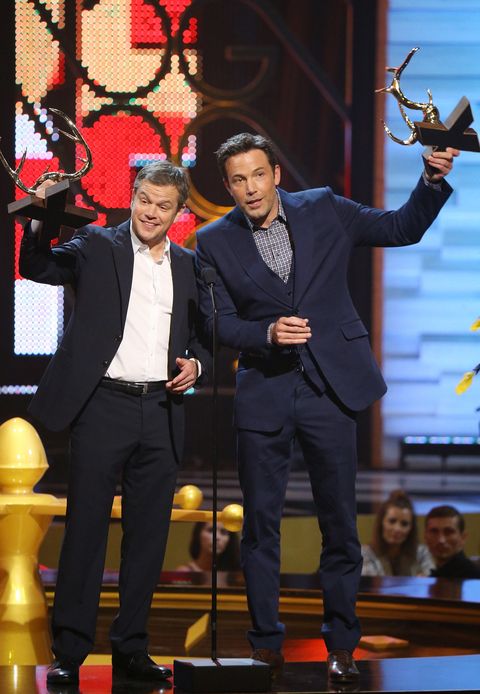 Fact: 2015 will forever go down in history as the year love shriveled up and died—and while many of Hollywood's cutest couples parted ways, Jennifer Garner and Ben Affleck's separation pretty much caused the world to enter a state of mourning. In the words of one traumatized twitter user, "Ben Affleck and Jennifer Garner can't get divorced they're the only stable relationship in my life."

The good news is that while Bennifer 2.0 crashed and burned, Ben's relationship with his one true love is still going strong. And obviously we're talking about Matt Damon.

The two came into each other's lives when they were wee lads in ye olde Boston, and—as proven by their appearance at the Guys' Choice Awards—their bromance is just as passionate as ever. Behold, Ben and Matt's adorable banter while accepting the Guys of the Decade Award (which is totally a real award, thank you very much):

Ben: "I think it goes without saying that this is an award Matt and I have been dreaming about since we were little boys. I did Gigli and Matt did that Liberace movie, and all of a sudden, it all seemed out of reach. Then I did [Batman v Superman] and all of a sudden, it was back in reach again. Now we're the…coveted Dudes of the Decade...the Guys of the Dickheads?"

Matt: "No, the Dickheads of the Decade Award. What is it called? It's the Guys of the Decade. We will cherish this, and we want to recognize some of the other nominees. Some of the dudes who weren't quite as decade-worthy: George Clooney and Brad Pitt."

Sigh, in these dark, Tayvin-less times, Ben and Matt's relationship is the only thing that keeps us going. Let's all agree to call them Batt from now on, mmmkay?

The 10th Annual Guys Choice Awards airs June 9 at 9pm ET on Spike, so you can catch Batt's speech IRL then.