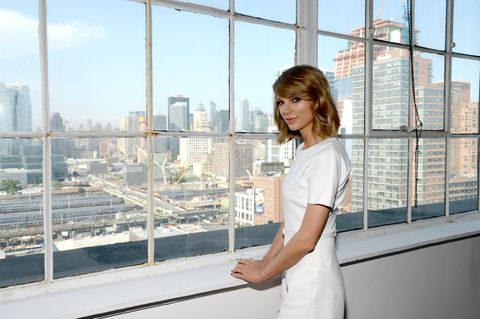 Please cast your mind back to simpler times, when Taylor Swift was perched atop Calvin Harris' shoulders while a bunch of inflatable swans looked on all "we out here." It was summer 2015, and Taylor's phone was full of Tayvin and cats.

But now—now that the world has been blessed with the existence of Hiddleswift—Taylor's phone has some hot new commodities. According to those kissing-on-the-rocks-in-Rhode-Island pictures that made us collectively lose our minds, Taylor and Tom Hiddleston *also* snapped a few selfies during their first couple-y jaunt.

Which brings up an interesting question: What was Taylor planning on doing with these selfies, exactly? Since the coupledom was announced not by the stars themselves but by sneaky-style paparazzi shots, we can imagine she didn't intend to, like, post them to social media. But if a selfie falls in the woods AKA is taken but not posted anywhere, can anybody hear it?

Here, we have several working theories for the eventual purpose of those selfies, because #journalism:

Clearly, one of these is the truth, but we welcome any additional theories you want to bring to the table.