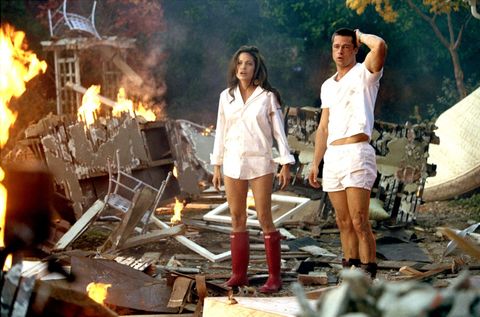 "I feel like I almost got [the part]," Stefani recently told Howard Stern, saying the casting process was highly competitive. "I went to a bunch of auditions....I wanted to do it, but I wanted to do music more."

Ummmm....what now? It's hard to imagine anyone playing Jane Smith other than Angelina Jolie—mostly because the chemistry between her and Brad Pitt was oh-so real. But let's pretend for a brief second Gwen had been cast in Mr. and Mrs. Smith. Some questions:

1. Would Brad and Angie have gotten together?

2. Would Brad still be with Jennifer Aniston?

3. And more importantly, would Gwen and Brad have fallen in love on set?

Listen to more of Gwen's interview below while your ruminate on the above.

Mehera Bonner Contributor Mehera Bonner is a news writer who focuses on celebrities and royals—follow her on Instagram.
Advertisement - Continue Reading Below
More From Celebrity
Megan and Harry Won't Use "Sussex Royal"
Every ‘Bachelor’ Star Who’s Dated a Real Celeb
Advertisement - Continue Reading Below
Cara Delevingne and Justin Bieber Are Feuding
Harry & Meghan Are Looking at a Mansion in Malibu
All the Details on Joe & Sophie's Rumored Baby
Vanessa Is Leaning Into "Thirsty Thursdays"
Justin Ranked His Wife's Friends on TV
Chrissy's Daughter Has No Time for Paparazzi
Jenna Dewan Gives Sneak Peek at Her Chic Nursery
Rihanna Went Big With Her 32nd Birthday Party