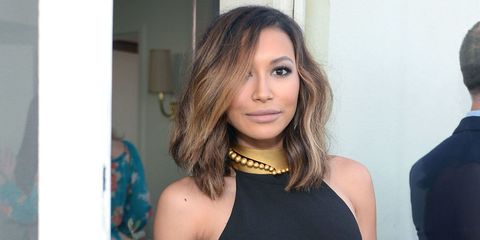 In a series of unfortunate events, Naya Rivera found her fiancé entertaining another woman, then learned that the aforementioned fiancé had called off their engagement—from the internet.

"We'd been fighting for five straight days while he was traveling, and then on the one day that he was back in LA, he said he didn't want to see me," she wrote in her autobiography Sorry, Not Sorry, in which she also reveals how she had an abortion while filming Glee. "Well, asshole, I've got a key to your house. I walk in, go downstairs, and guess what little girl is sitting cross-legged on the couch listening to music? It rhymes with 'Smariana Schmande.'"

Damn. After that unpleasant discovery, the awkwardness only compounded when Big Sean, who went on to date Smariana Schmande, released a statement announcing his single status, unbeknownst to Rivera. But all's well that ends well: Rivera married current husband Ryan Dorsey just months later—using the same ceremony she'd planned for her wedding to Big Sean. Now *that's* killing two birds with one stone.

Chelsea Peng I'm Chelsea Peng, the assistant editor at MarieClaire.com.
This content is created and maintained by a third party, and imported onto this page to help users provide their email addresses. You may be able to find more information about this and similar content at piano.io
Advertisement - Continue Reading Below
More From Celebrity
J.Lo "Likes" Shady IG Post After A-Rod Split 👀
Beyoncé Shares Photos of Her White Power Suit
Advertisement - Continue Reading Below
Will & Kate Welcomed Harry Back Into Their Group
Queen Left a Handwritten Note on Philip's Coffin
The Queen Said Grief Is the Price We Pay for Love
All of the Photos from Prince Philip's Funeral
The Queen Wore This Brooch to Philip's Funeral
Kate Middleton's Nod to Diana at Philip's Funeral
Queen Elizabeth Appears at Prince Philip's Funeral
Harry Back With Will & Kate at Philip's Funeral