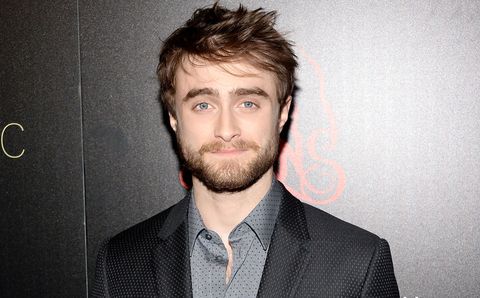 Everyone is obsessed with the kids from Stranger Things, including Harry Potter himself, Daniel Radcliffe. According to Entertainment Weekly, he had a major fanboy freakout about the young actors during an interview on the BBC Radio 1 Breakfast Show earlier this week.

When Radcliffe heard that the Stranger Things kids were coming on the show the day after him, he lost it and the gushing commenced.

"Oh my god. Okay, can you, like, just tell them that I think they're amazing and also just say, like, that as a person who started out acting really young, how are they so good?" he said. "I wasn't that good when I was a kid. Have the decency to be less good at acting, please, when you're so young."

Host Nick Grimshaw made good on his promise to pass Radcliffe's praises along. The next day, when Millie Bobby Brown, Gaten Matarazzo, and Caleb McLaughlin showed up for their interview, he played them the clip of Radcliffe's mini-freakout.

"He says, 'I wasn't that good when I was younger,'—he was Harry Potter," Brown said. "Let's just review…I think he was doing pretty fine."

Listen to the full clip below.

This content is imported from Third party. You may be able to find the same content in another format, or you may be able to find more information, at their web site.
Kayleigh Roberts Kayleigh Roberts is the weekend editor at Cosmo, focused on celebrity news and royals.
This content is created and maintained by a third party, and imported onto this page to help users provide their email addresses. You may be able to find more information about this and similar content at piano.io
Advertisement - Continue Reading Below
More From Celebrity
Meghan Markle and Prince Harry Arrive in NYC
Kate Middleton Looked Radiant in Cream
Advertisement - Continue Reading Below
People Are Convinced Kylie Is Having a Boy
Kim Kardashian's Met Gala Ponytail Cost $10K
Megan Fox and Kourtney Posed for Sexy Skims Pics
Britney Spears Dedicated a Message to Her Sons
Meghan's Face "Lights Up" When Harry Walks In
Kate Middleton, Millennial, Wore Skinny Jeans
'Sex and the City' Star Willie Garson Dies Age 57
Princess Eugenie's Son Got to Meet Prince Philip