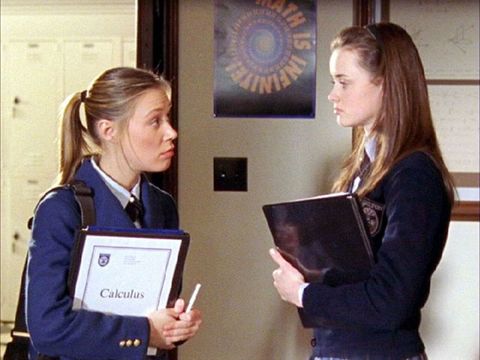 It feels like there's no one on the planet who isn't excited for Netflix's Gilmore Girls: A Year in the Life. But, turns out, someone from the cast was actually not 100% full of happy feels when she was asked to return. Liza Weil, aka fierce-to-a-fault Paris Geller, just admitted that she got a major case of nerves when it came to stepping back into her Gilmore Girls role.

According to E! Online, Weil, who currently stars on ABC's How to Get Away With Murder, was worried her current character's very dark and twisty personality would accidentally seep into her performance as Paris.

"I was worried," Weil admitted. "I was definitely worried because I had wrapped season two of Murder and I think, like, the next day or two days later, I was on set on Gilmore Girls."

Weil's fears were put to rest as soon as she got back on set though. She credits series creator Amy Sherman-Palladino and her husband, Gilmore Girls executive producer Dan Palladino, with putting her at ease, via their writing.

"But I will say that Amy and Dan's writing, it just really does the trick for me. Paris is so alive in that writing and it's just very, very different from Bonnie," Weil said. "It was actually a very welcome sort of respite from Bonnie. It felt nice to be a little bit more broad and all of those Paris Geller-y things....You read those scripts and it's all on the page. It certainly made it easier."

We can't wait to see Paris back in all of her lovable Paris craziness when Gilmore Girls: A Year in the Life premieres on Netflix Nov. 25.

Kayleigh Roberts Kayleigh Roberts is the weekend editor at Cosmo, focused on celebrity news and royals.
This content is created and maintained by a third party, and imported onto this page to help users provide their email addresses. You may be able to find more information about this and similar content at piano.io
Advertisement - Continue Reading Below
More From Celebrity
Harry Carries Briefcase That Reads "Archie's Papa"
Meghan Markle and Prince Harry Arrive in NYC
Advertisement - Continue Reading Below
Kate Middleton Looked Radiant in Cream
People Are Convinced Kylie Is Having a Boy
Kim Kardashian's Met Gala Ponytail Cost $10K
Megan Fox and Kourtney Posed for Sexy Skims Pics
Britney Spears Dedicated a Message to Her Sons
Meghan's Face "Lights Up" When Harry Walks In
Kate Middleton, Millennial, Wore Skinny Jeans
'Sex and the City' Star Willie Garson Dies Age 57