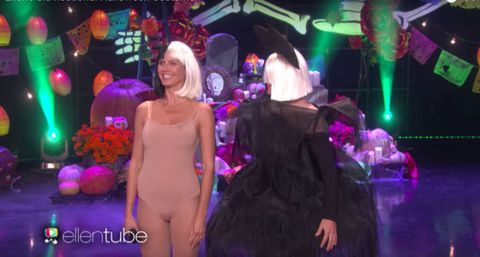 Nobody celebrates Halloween quite like Ellen DeGeneres and Heidi Klum. Every year, DeGeneres dresses up as pop-culture icons for Halloween, and Klum absolutely kills it with over-the-top, elaborate costumes.

"Sia and I have whole lot in common," Ellen joked. "She's Australian and I married an Australian, and we both like to swing from a chandelier, which is why I am no longer welcome in Bed, Bath and Beyond." With only seven whole minutes of rehearsal time, Ellen and Heidi wowed the audience with their wacky rendition of Sia's video for "Chandelier."

Happy Halloween from @theellenshow and I 😘 pic.twitter.com/ytXgWb1v52

Heidi's dance moves aren't half bad, and what's most impressive is she successfully manages to keep the Sia wig on her head while dancing. But after Heidi leapt off the stage at the end of her performance, Ellen jokingly admitted that seeing through the Sia wig is difficult and Heidi may now be in a good bit of pain. But anything for a good Halloween costume, right? Sia and Maddie would definitely be proud.