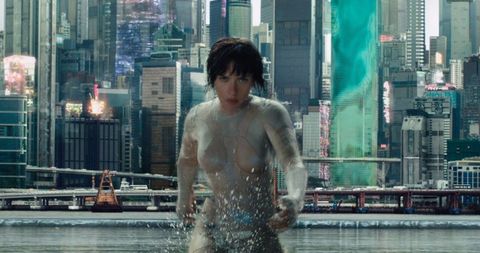 The first trailer for Ghost in the Shell, starring Scarlett Johansson, is here. Based on the Japanese manga series of the same name, the movie is highly-stylized and definitely not short on action.

As Entertainment Weekly reports, Johansson's casting was the source of controversy earlier this year, since her character, The Major, is Japanese in the source material.

At the time, producer Steven Paul defended the casting choice, which many called out as an example of whitewashing, telling BuzzFeed News, "I think everybody is going to end up being really happy with it. They're going to be very, very happy with it when they see what we've actually done with it, and I don't think anybody's going to be disappointed."

After seeing the first trailer, though, opinions are mixed. While some viewers are expressing cautious optimism or even outright excitement for the movie, many others still take issue with the decision to cast a white actress to play a Japanese character.

I really don't think 'Ghost in the Shell' is gonna do well and it's their own fault. They could've just cast Japanese actors.

Just because I think the upcoming Ghost in the Shell movie looks good doesn't mean the problems are erased like that.

Ghost in the Shell -- Wow, all this really cool stuff is only made all the more awkward because Major is ScarJ and not an Asian actress.

Some people are even drawing connections between the problematic casting in the film and the 2016 election.

#GhostInTheShell embraces Japanese culture then eliminates the Japanese from it. It centers whiteness above all. This is how we got Trump.

As if current events aren't soul-crushing enough, heeeeeeeere's #GhostInTheShell and the normalization of whitewashed cultural appropriation