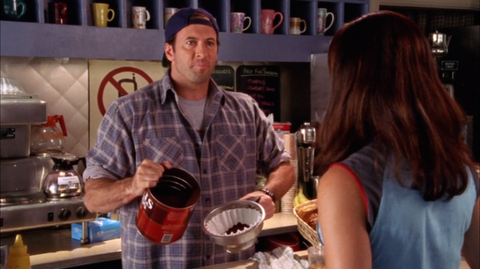 It feels like the entire world is excited for Gilmore Girls to return. We're excited, the cast is excited—and for good reason. When A Year in the Life premieres on Netflix, we'll finally get some closure for our favorite characters (are Luke and Lorelai married yet? Who did Rory end up with? How is everyone doing after Richard's death?).

We'll also finally hear the infamous final four words—the ones creator Amy Sherman-Palladino says she always intended to end on before she and husband/producer Daniel Palladino left the show at the end of season 6. A lot of Gilmore fans are *quite* invested in those final four words.

Turns out, at least one member of the cast was just as invested: Scott Patterson, who plays grumpy diner owner/coffee master Luke Danes.

"I actually submitted a list of what I wanted the four words to be to Amy and Dan [Palladino]," he told TV Line. "And when I found out what the four words actually were, I was quite perturbed. They didn't take [my suggestions]. So I made some phone calls and raised the roof a little bit."

On a more serious note, Patterson added that he was actually "a little surprised" by what the four words were and said that the exchange (which takes place between Lorelai and Rory, of course) is "clever" and "made sense" as a note to end the series on.

And while this might have fans more anxious than ever to just FINALLY hear those words, Sherman-Palladino would really, really love it if you don't jump ahead or spoil it for the rest of the internet when you finish your binge.

Your Gilmore Girls: A Year in the Life binge begins November 25.