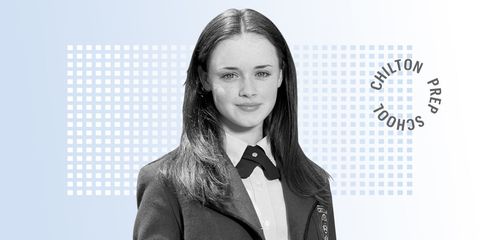 In the early 2000s, Rory Gilmore was an icon to nerdy, quiet, bookish girls everywhere. When we met her, she was leaving her so-so public school behind for an Ivy-bound education at Chilton—totally aspirational. Then she went to Yale, leaving audiences thinking "dang, Rory just keeps getting better."

Except that she doesn't.

Despite making her Ivy League dreams come true, Rory Gilmore actually peaked in high school, which isn't something you'd generally imagine a Rory Gilmore-type doing. Sure, it's possible that she'll redeem herself when we meet her again in Gilmore Girls: A Year in the Life, but when it comes to the original series run, high school Rory > college Rory, every single time. Here's why:

1. When Headmaster Charleston (and older, male, white authority figure) sits high school Rory down and tells her she might not have what it takes, she fights back, studies harder, and becomes valedictorian of her class.

2. Meanwhile, when Mitchum Huntzberger (another white male authority figure) tells college Rory she might not have what it takes to be a journalist, she drops out of Yale. I repeat: She. Drops. Out. Of. Yale.

3. When high school Rory gets a D on a paper in Max Medina's class, she accepts his criticisms, moves forward, and works harder.

4. When college Rory gets a (quite honestly, very deserved) D on a paper at Yale, she argues with the professor, nearly cries, and then storms out with a sassy quip.

5. High school Rory fights for a spot on the Chilton newspaper, takes any story she's assigned, and makes it the best it can be.

6. Meanwhile, college Rory feels entitled to better stories than she's being assigned. Oh, and then she's voted Editor-in-Chief of the paper after dropping out of Yale for a semester (a position she isn't running for and three other students are).

7. High school Rory's responds to a bad day by saying the word "suck" a lot and eating junk food with her mom.

8. College Rory responds to a bad day by stealing a yacht with Logan and ending up in jail.

9. High school Rory has an incredible work ethic and impeccable time management. She gets straight A's, excels in extra curricular activities, and still finds time for Stars Hollow's many festivals and celebrations.

10. College Rory acts like the world is ending when she's asked to complete 300 hours of community service over the course six months, which works out to 12.5 hours a week. During this time, she has no job, no schoolwork, and is living a plush rent-free existence in her grandparents' pool house. 👀

Everyone changes in college, but Rory Gilmore changed almost exclusively for the worse. All the fingers crossed that she gets some redemption in Gilmore Girls: A Year in the Life, which premieres on Netflix THIS FRIDAY.