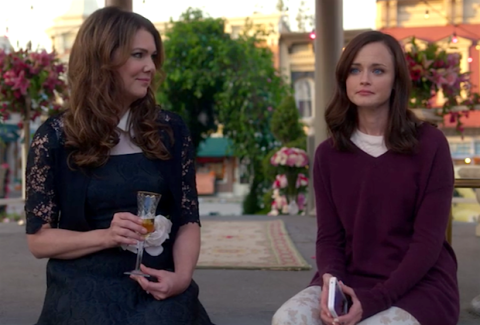 It probably goes without saying, but almost nothing but spoilers ahead, so if you haven't watched Gilmore Girls: A Year in the Life yet and want to experience the Final Four Words for yourself, stop reading now.

So what were the Final Four Words?

And that's it. Fade to black, the end (unless Netflix and the Sherman-Palladinos decide to go for more, of course). Obviously, this is meant to be a full circle moment, and since Rory is 32 in A Year in the Life (the age Lorelai was at the beginning of the original series), it kind of works. But let's not forget that Amy Sherman-Palladino didn't intend for Rory for be 32 when she spoke these words; she intended for Rory to be 21 or 22 when she spoke them.

This would have, obviously, drastically altered the ending of the original series. It's unlikely Rory would have been setting off to cover the Obama campaign, for example, if she had just found out she was pregnant.

Obviously, it's going to take a while for Gilmore fans to process this ending and what it would have meant for the characters back in 2007, but now at least we finally know.

Kayleigh Roberts Kayleigh Roberts is the weekend editor at Marie Claire, covering celebrity and entertainment news, from actual royals like Kate Middleton and Meghan Markle to Hollywood royalty, like Katie Holmes and Chrissy Teigen.
This content is created and maintained by a third party, and imported onto this page to help users provide their email addresses. You may be able to find more information about this and similar content at piano.io
Advertisement - Continue Reading Below
More From Celebrity
Will's Friends Made "Jibes" About Kate's Mom
William Will Suffer "Worst" from Harry's Memoir
Advertisement - Continue Reading Below
Simone's Boyfriend Sent Her the Sweetest Message
Harry's Friends Don't Want to Be in His Memoir
Will & Kate's Modern Approach to Raising George
Meet Simone Biles's Super Supportive Parents
What Happens on Katie's Season?
Bennifer Recreated Their 2002 PDA Moment
Why Harry's Memoir Release Date Has Upset People
The Royals Are Worried About Prince Harry's Memoir