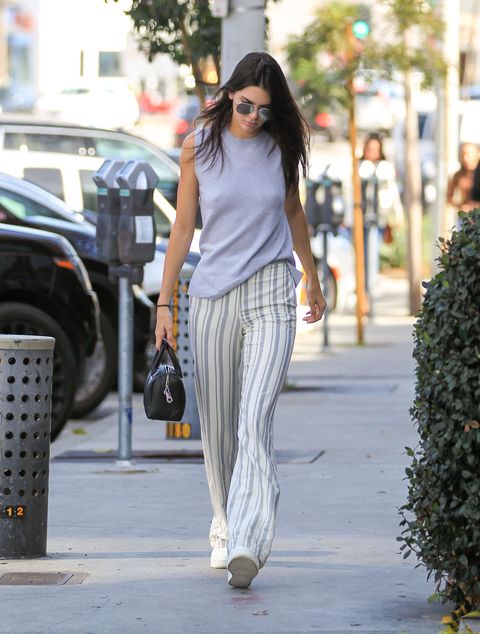 Kanye West is currently in the hospital after suffering a reported "nervous breakdown" on the anniversary of his mother's funeral, and his family's rallying behind him in Los Angles. Which might be why the usual gaggle of Kardashians are not in Paris with Kendall Jenner, who will be walking in the Victoria's Secret Fashion Show later today.

"It's [just] me," the model said backstage. "Yeah, no one is coming out but they're all—I've literally been texting with all of them, like, the past couple days. Everyone's, like, freaking out, I got so many flowers from, like, all my family members. So, yeah, I feel the love for sure from L.A."

Jenner was asked directly about Kanye West's health, and had this to say when asked if he'd be okay: "Yes, of course, everyone's okay. Everyone is doing okay, just praying."

It's unclear when West will be released from the hospital, as doctors are reportedly struggling to diagnose him.

Mehera Bonner Contributor Mehera Bonner is a news writer who focuses on celebrities and royals—follow her on Instagram.
This content is created and maintained by a third party, and imported onto this page to help users provide their email addresses. You may be able to find more information about this and similar content at piano.io
Advertisement - Continue Reading Below
More From Celebrity
Rob Lowe: Prince Harry Is Rocking a Ponytail Now
Rihanna Stuns in $2 Million of Diamonds and Rubies
Advertisement - Continue Reading Below
Fans Think Zayn Just Hinted at Proposing to Gigi
Ben Affleck Said J.Lo Faced "Sexist, Racist" Media
Kate & William Might Get Vaccinated on Camera
40 Celebrity Sisters Who Look So Much Alike
Iconic Party Photos From the Past
The Best TV and Movie Wedding Dresses of All Time
40 Rare Photos of Grace Kelly Through the Years