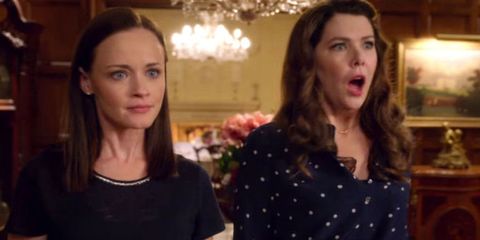 It's hard to believe there's a Gilmore Girls fan left on the planet who hasn't seen A Year in the Life at this point, but there is at least one. Lauren Graham (aka Lorelai Gilmore herself) hasn't seen the revival series yet, and there's a chance she never will.

According to Entertainment Weekly, Graham opened up about not watching the show in a 92nd Street Y talk with Michael Ausiello.

"There are many actors who learn a lot by watching themselves. I'm not one of those people, so I stayed away from it," Graham explained.

But even though she doesn't feel like she gets much out of watching her own performances in general, Graham also admitted that there's more to it when it comes to Gilmore Girls.

"I was so on another plane, it felt like, during the doing of the thing, and I had some of my favorite moments I've ever had as an actor and as a person in that experience," she said. "I just want to leave it there for now—that was enough. That was more than enough. It was the best experience I've ever had."

Her Gilmore hangups don't start with watching the Netflix revival though. Graham said she struggled to even read the script for "Fall," the final episode of A Year in the Life.

"I shot a couple scenes without having read the whole thing," she admitted. "I was on this crazy high and feeling so thankful and so pleased with what the material was, I almost didn't want to know how it ended. I was worried where it was going and what if I'm disappointed. But finally I had to do it, 'cause I really had to film it, and I sat at the kitchen table and I cried from page one all the way to the end. It was the biggest emotional experience."