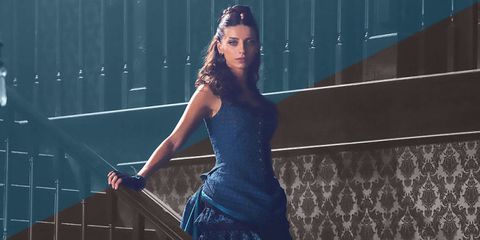 Westworld is over and we have so many questions. Almost as many questions as we had on election night. The hit HBO show just wrapped up its brilliant, perfect, utterly genius inaugural season (edit note: please excuse my unbridled fandom), and MarieClaire.com immediately hopped on the phone with Angela Sarafyan (AKA Clementine) for some answers. Read on for her theories about Season 2, plus a major finale reveal that you probably missed.

Marie Claire: Is it safe to say that we haven't seen the last of Clementine? Will she be around next season?

Angela Sarafyan: "I hope that she is. She shot Ed Harris' character in the shoulder, so I have hope that she'll show up for Season 2."

MC: Wait, Clementine shot The Man in Black?! You just blew my mind.

AS: "Yep, that was Clementine! I feel like she and the hosts are awake in a different way."

MC: You were in the scene when Bernard goes down the rabbit hole and realizes he's made in Arnold's image. What was that like to film?

AS: "We shot that scene for about two weeks. Anthony Hopkins is the kindest, sweetest most creative person I've met. He did something really insane between takes, out of nowhere. He started doing the lines from Silence of the Lambs, and I was like 'Oh my god, is this happening right now?' It was surreal. His voice changed, his demeanor changed, everything changed. He's a chameleon, in a matter of seconds he becomes something else."

MC: Maeve's note indicated that there's more than one park...will next season play on that? Southworld perhaps?

AS: "Honestly I have no idea, I genuinely don't know. They haven't given us any hints, nobody knows anything, I promise. That's how the show was—we would go from episode to episode not knowing until the minute we read what was going to happen. I'm in the same place you are—what is going to happen?! We're all excited to see what's to come."

MC: What are your own personal fan theories going into next season?

AS: "I feel like a war is about to begin. This is just a guess, but looking at where things ended, now it's going to the next level. The hosts are no longer under the control of these people, now it's time to fight back. What do you think?"

MC: That there are several other parks, and once the robots takeover Westworld, they'll focus their awakening on a new world.

AS: "I agree, there might be a lot of other parks."

MC: Robots have no social order instilled in them. Who will be their leader? Will they understand empathy now that they're free?

AS: "I have a theory that the hosts are like babies. Whatever you do, they will learn, imitate, and do it back. It's like the purity and clarity of a newborn. If they're a clean slate, there's no agenda—just the need to survive. But at the same time, whatever is done to them remains in their memory. I think they have empathy, I think they do because they're these advanced creatures. But when they're constantly mistreated and used as toys—like that end scene with Teddy and Dolores—that inhumane treatment is what they suck into their brains."

MC: I think there was a moment of empathy between Maeve and Clementine when Maeve says goodbye.

AS: "That definitely exists for them. They care about and love each other."

MC: What do you imagine the human world outside of Westworld looks like?

AS: "When Maeve cuts a tech's neck and it's glued back together, it proves they're in a world that is definitely not the present. I hope we get a glimpse of that, it would be really cool. I can't imagine what it's going to be like."

MC: There are very few moments in pop culture where the internet really bands together and obsesses over something. Massive fandom is thrilling. What does it feel like to be part of that?

AS: "It's kind of a collaborative relationship. Westworld requires the investment of the people watching, and that's what I love about it. It changed my life. When I read the script, I was like, 'This is going to change the way I think about my own life. The way I see myself, the people around me, and the way I choose to exist.' That's what great material does. It transcends just being pop cultural entertainment, and actually involves the mind. It's really fun, and when I see the reactions and theories it makes me really excited. That's why I act."

Mehera Bonner Contributor Mehera Bonner is a news writer who focuses on celebrities and royals.
This content is created and maintained by a third party, and imported onto this page to help users provide their email addresses. You may be able to find more information about this and similar content at piano.io
Advertisement - Continue Reading Below
More From Celebrity
Royals Had Several Talks About Archie's Skin Color
See Blake Lively's *Impressive* Watermelon Cake
Advertisement - Continue Reading Below
Prince Charles Cant Deal with Harry's Criticisms
Serena Gave Daughter Olympia a Tennis Lesson
Meghan Shared What Helped Her Through 2020
Kylie and Travis Are "Very Close" After Reuniting
Meghan's Book 'The Bench' Tops Best Sellers List
Kaavia Talks to a Bee in an Adorable IG Video
David Harbour on Being Stepdad to Lily Allen's Kid
Ben Affleck Is "Getting to Know" J.Lo's Kids