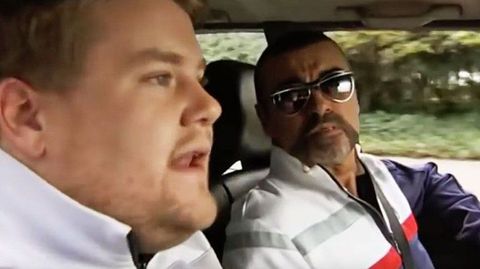 James Corden's Carpool Karaoke segments have become late night/viral internet classics at this point, but it looks like Corden had a bit of help coming up with the now-iconic concept, according to Digital Spy.

During a 2011 sketch for Comic Relief, a major charity in the UK, Corden teamed up with pop legend George Michael and the result was the comedy baby that would grow up to be Carpool Karaoke. In the sketch, Corden played his Gavin and Stacey character, Smithy, and Michael played himself—but a version who wasn't "allowed" to be a part of Comic Relief.

To cheer Michael up, Smithy drove him around and together they belted out the singer's 1986 Wham! classic, "I'm Your Man."

Michael, the groundbreaking pop star who many remember as half of the duo Wham!, was found dead in his home in England on Christmas Day. Naturally, Corden was among the celebrities who paid tribute to the singer on social media following the sad news.

I've loved George Michael for as long as I can remember. He was an absolute inspiration. Always ahead of his time.

Kayleigh Roberts Kayleigh Roberts is the weekend editor at Marie Claire, covering celebrity and entertainment news, from actual royals like Kate Middleton and Meghan Markle to Hollywood royalty, like Katie Holmes and Chrissy Teigen.
This content is created and maintained by a third party, and imported onto this page to help users provide their email addresses. You may be able to find more information about this and similar content at piano.io
Advertisement - Continue Reading Below
More From Celebrity
See the Royals Socialize at a 1991 Cocktail Party
Eugenie's Pics from Inside Harry and Meghan's Home
Advertisement - Continue Reading Below
Queen Trolled Tourists Who Didn't Recognize Her
Blake and Ryan Recreated Their First Date on IG
Charles Expertly Ignored Boris Johnson's Snafu
How Kitty Spencer's Wedding Dress Honored Diana
Dolly Parton On the #FreeBritney Movement
Will & Kate Are Nervous About George's Future
George Won't Be Forced to Go to Boarding School
Diana Would Have Written a Memoir Too, Friend Says