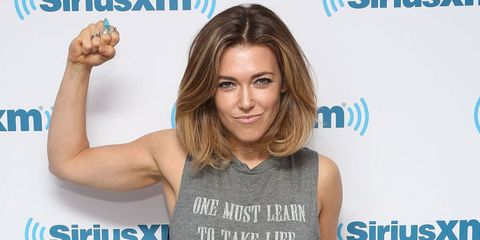 If you associate Rachel Platten's empowering anthem "Fight Song" with Hillary Clinton, you're not alone. The hit became the unofficial theme song of Clinton's campaign and a rallying cry for her supporters.

That's why it was so disconcerting when The Piano Guys covered the song at one of Trump's inaugural balls Friday night. Platten has responded to the (unauthorized) cover, and turns out, she was just as confused and displeased as anyone.

While I respect the office of the President and the peaceful transfer of power, I want to make clear that at at no point did the Piano Guys

ask for permission, nor did I or anyone on my team know of, approve or endorse their decision to play Fight Song tonight.

The Piano Guys—who rose to YouTube popularity for covers of classic songs and pop hits—performed a mash-up of "Fight Song" and "Amazing Grace" at the Freedom Ball, but insisted that the song choice had "nothing to do with Hillary Clinton or politics."

They did admit, however, that Platten did not endorse the use of her song...so at least there's that?

Our performance tonight, which combined "Fight Song" and "Amazing Grace" had nothing to do with Hillary Clinton or politics....

We chose to perform our version of "Fight Song/Amazing Grace" - it was not endorsed by Rachel Platten. We love Rachel and we love her song.

Kayleigh Roberts Kayleigh Roberts is the weekend editor at Marie Claire, covering celebrity and entertainment news, from actual royals like Kate Middleton and Meghan Markle to Hollywood royalty, like Katie Holmes and Chrissy Teigen.
Advertisement - Continue Reading Below
More From Celebrity
Why Isn't Beyonce at the 2020 Grammys?
Watch Demi Lovato's Emotional Grammys Performance
Advertisement - Continue Reading Below
Beyoncé's Pre-Grammys Look
Blake and Gwen Were Too Cute at the Grammys
The Jonas Brothers' Grammys Performance Was a Lot
Alicia Keys Covers 'Someone You Loved'
Lizzo Opens the Grammys With an Epic Performance
Chrissy and John Win Best Dressed at the Grammys
Sophie Turner Stuns In a Gothic Look
Ariana Grande Is a Disney Princess at the Grammys