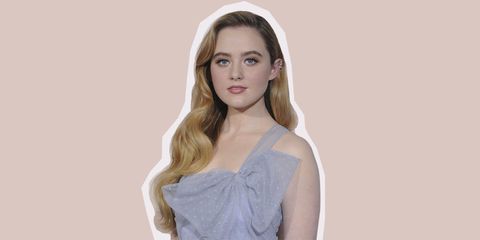 When all your favorite actors come together in one ensemble cast, there are only two options: epic disaster (ahem, certain superhero movies that shall go nameless) or epic success. And in the case of HBO's brand-new Big Little Lies—starring Reese Witherspoon, Nicole Kidman, Shailene Woodly, and Zoë Kravitz—we're talking *huge* success. The show is mysterious, addictive, and brilliantly acted—and in addition to the A-list cast, features a bunch of new faces who absolutely kill it.

MarieClaire.com spoke to Big Little Lies actress Kathryn Newton about what it was like working with her idols, chilling on set with her on-screen mom Reese Witherspoon, and re-defining teen angst.

"After the table read is when we first started to bond. I told her I went to high school and I'm a regular kid, and did this show instead of trying to play golf at USC as a walk-on. And she was like, 'Well, do you want to go to college?' I said yes, and she was like 'You need to go to college.' Every time I see her she says, 'So have you signed up for college yet?!' She's a realist."

On her character's sex-positive story arc:

"Talking about sex can be awkward at that age, but my character has women in her life she can talk to. Sex is a big deal. And you don't have to talk to your mom—you can talk to a friend, a sister, someone responsible. That's a really important message. Everyone goes through it. Every girl goes through that stage in her life, and we shine light on it in a particular way that a lot of people will relate to. It's an awkward subject."

On how the show subverts the "pitting women against each other" stereotype:

"The point of the show is that secrets, snide comments, and insults actually bring the women together in a profound way to protect each other. In the end, these women have each other's backs—even though they can be horrible and mean. In the end, they get each other. Also, the majority of the people in charge of this project were women. It went so smoothly, there were no issues—I loved being on that set. Women can do it."

On going without makeup for the role:

"As an actor, you audition a lot for 'the girlfriend,' or the 'hot girl.' It's way more fun to play a role like this. She's a rebel, she's a feminist. I went to set without hair and makeup. That's really fun, to be that free. Women are always told to look a certain way—look cute, or dress nice. She doesn't do that. She's unforgivably herself, and it's hard to be yourself—especially as a teenager."

On crying with Shailene Woodley:

"I was such a big fan and I was like 'Oh my god she's such a big star, she's not going to talk to me.' The day I saw her I realized she's one of the deepest girls. I don't even have words. I'll have a conversation with her and be crying."