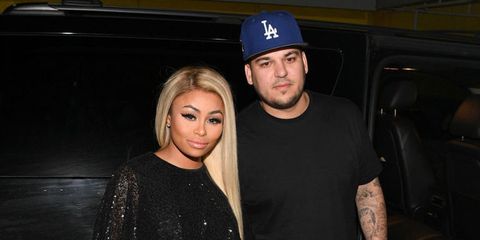 There's trouble in paradise yet again for Rob Kardashian and Blac Chyna. The reality stars and on-again, off-again couple are officially off again, People reports.

Kardashian and Chyna's relationship has been fraught with drama since the start. A quick recap: They went public with their love in January 2016, split in March, got engaged in April, announced they were expecting in May, welcomed daughter Dream in November, split in December, and then reconciled and spent New Year's together. And now, they've called it quits again.

"They split a while ago. The wedding plans are off," a source close to Kardashian told People. "They are both trying to be mature about it. It was less dramatic this time."

Another source told People that Chyna was turned off by Rob's "issues." Kardashian detailed his decision to start therapy during season one of Rob & Chyna.

"Chyna is super fed up with Rob and thinks he is way too emotional and depressed. She thinks he has terrible issues," the source, who knows both Kardashian and Chyna, told People. "He is always battling his own insecurities and is unstable. It's a major turn-off to her, and she thinks it's incredibly unhealthy for the baby and their family."

We'll no doubt get the full story when season two of Rob & Chyna premieres later this year.

Kayleigh Roberts Kayleigh Roberts is the weekend editor at Marie Claire, covering celebrity and entertainment news, from actual royals like Kate Middleton and Meghan Markle to Hollywood royalty, like Katie Holmes and Chrissy Teigen.
This content is created and maintained by a third party, and imported onto this page to help users provide their email addresses. You may be able to find more information about this and similar content at piano.io
Advertisement - Continue Reading Below
More From Celebrity
Lady Gaga Wears Athleisure and Platform Shoes
Meghan Markle Possibly Shared a Photo of Lilibet
Advertisement - Continue Reading Below
The Kardashians' Most Body-Confident Nude Shoots
What Happens on Katie's Season?
Britney Spears Says She Was Locked in a Bathroom
Kate and William Holiday In Cornwall
Blake Lively Wears a Pink Sequin Dress
Meghan Markle Hangs Out With Melissa McCarthy
Simone's Boyfriend Sent Her the Sweetest Message
Rebel Wilson Recreated This Britney Spears Look