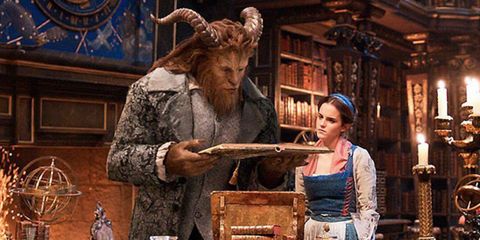 Beauty and the Beast is a beloved classic, but the tale as old as time has also been plagued by criticism for its depiction of Belle and the Beast's relationship. You've heard the critique before: Belle, who's a prisoner in the Beast's castle, is trapped in an unhealthy relationship and exhibits symptoms of Stockholm Syndrome.

With the live-action adaptation set to hit theaters on March 17, questions about Belle and the Beast's relationship are once again front and center. When asked about that whole Stockholm Syndrome thing, Emma Watson, who's playing Belle in the remake, shut it down right away.

"It's such a good question and it's something I really grappled with at the beginning; the kind of Stockholm Syndrome question about this story," she told Entertainment Weekly. "That's where a prisoner will take on the characteristics of and fall in love with the captor. Belle actively argues and disagrees with [Beast] constantly. She has none of the characteristics of someone with Stockholm Syndrome because she keeps her independence, she keeps that freedom of thought."

"I think there is a very intentional switch where in my mind Belle decides to stay," she explained. "She's giving him hell. There is no sense of, 'I need to kill this guy with kindness.'"