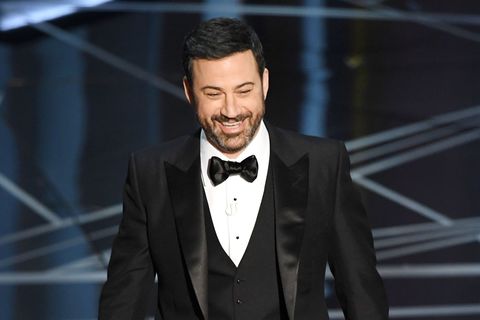 Jimmy Kimmel has hosted the Emmys, the ESPYs, and the American Music Awards multiple times, but this year was his debut assuming the stage at the Oscars. Taking the reigns from Chris Rock, Kimmel told CNN prior to his appearance that the pressure of hosting the Oscars made him especially nervous, as the audience has become increasingly distracted by the political sideshow going on beyond Hollywood.

Since the changes in Washington are at the top of everyone's minds, Kimmel didn't hold back on the political narrative for his opening monologue.

"This broadcast is now being watched by millions of people around the world that now hate us. The country is divided right now," he said as he opened the night.

Referencing the fact that people had asked him to say something unifying in his opener, the comedian deadpanned, "I can't do that. There's only one Braveheart in this room and he's not going to unite us either." He then recommended that if everyone reached out to someone who had a different perspective, "it would make America great again."

Other nods to the political climate were soft jabs at the culture xenophobia of America, apologizing for no one watching Moonlight or France's Elle. "We are very welcoming to outsiders here in Hollywood: we discriminate against them based on our age and weight," he joked.

But the biggest takeaway? His point that everyone in the room would be fodder for next-day hate Tweets from Trump on the toilet.