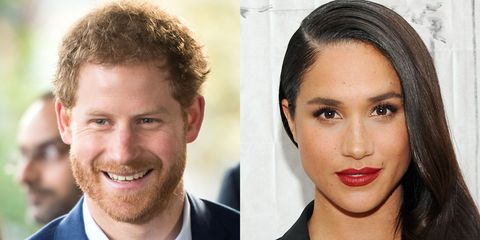 Because their relationship wasn't already #goals enough, Prince Harry and Meghan Markle reportedly just jetted off yesterday on a secret vacation to Jamaica, where they'll attend a wedding this weekend. But to be clear: not their wedding. Because that would be insane and warrant at least a dozen 🚨 🚨 🚨 🚨.

Here's what we know:

1. Meghan and Harry arrived in Jamaica on Thursday, March 2, and are staying in Montego Bay, St. James. Harry flew in from London, while Meghan flew in from her Toronto home. So yes, they're having a romantic reunion.

2. An old lady had to change seats to make way for Harry's security detail on the Virgin Atlantic flight he took. One assumes he hooked her up with an even better seat.

3. They're attending the wedding of Harry's best friend Tom Inskip, who goes by "Skipp," because duh, adorable. He's tying the knot with literary agent Lara Hughes-Young.

Prince Harry and Tom Inskip (that guy with his hand in front of his face) attend a friend's wedding in 2013.
Getty Images

4. The wedding will be a three-day event, and Usain Bolt is rumored to be attending. The bride and groom have rented out a private villa called the Round Hill Hotel for the event. The staff have been asked to sign non-disclosure agreements.

5. It appears to be a big deal that Harry took Meghan as a date to this wedding, since it signals just how serious their relationship is getting. "This the first time that she and Harry have socialized so openly as a couple and is a significant step up in their relationship," a source tells The Daily Mail. "Make no mistake, he is heads over heels about her. This one could go all the way."

6. Rumor has it that Harry is best man.