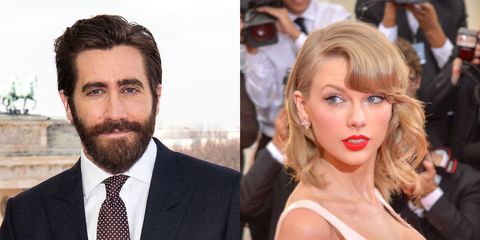 Remember when Jake Gyllenhaal dated Taylor Swift? And they meandered around Brooklyn, all:

Taylor reportedly wrote "Red" and "All Too Well" about their relationship (good, awkward times), and no—Jake Gyllenhaal does not want to talk about it.

During a highly awkward/amazing interview with The Guardian, interviewer Tim Jonze innocuously asked Gyllenhaal about his decision to date someone known for writing material about her boyfriends. His response?

"I think when you're in a relationship, you are constantly scrutinized, your friends are scrutinized, but..." He trails off and stares at me, ramping up the intensity of his eyes like he's done in so many roles. But what? Gyllenhaal just continues to stare. Then he performs an exaggerated shrug. So, er, did he listen to any of the many songs rumored to be about him? More silence. The atmosphere has become uncomfortably tense. Would he like to move on? "I would love to not talk about my personal life." I don't think this is, massively. "Oh, really? You don't?" he asks. Well, I say, it's not prying for intimate details, is it? It's asking how you responded to things that have been put out there in the public domain. But he disagrees and we end up engaging in a bizarre stand-off where anything I say is met same response, repeated through a cold smile: "I would love to talk about the movie."

Things didn't get much better from there, with Gyllenhaal circling back to the Taylor issue during a rant about fascism.

"Art, movies...they're political whether you're saying something overtly or not," he mused. "No wonder it's dangerous! No wonder, probably, people are trying to defund it! So, it's an irony to me when people say: 'An entertainer or actor should not be political,' because it's very easy to sideline people and, for instance, ask about past relationships or things that I believe are meant to be private."