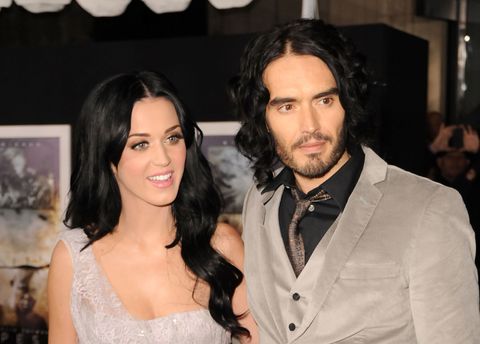 Back in the dark ages (read: 2009), and long before she was floating atop a paddle-board with nude Orlando Bloom, Katy Perry fell in love with Russell Brand. The pair's whirlwind romance resulted in a 14-month marriage that ended in divorce. And no, they're not exactly on great terms.

That said, while Brand has previously called Perry "vapid" and "mindless," he was slightly kinder during a recent interview—blaming fame for their split instead of her.

"I have come away from that experience and I still feel very warm towards her," Brand explained. "When I hear about her or see her, I think 'Ah, there's that person, that person in the world.'"

"Katy was obviously very, very occupied and busy. I was occupied and busy but not to the same degree," he continued. "The marriage didn't last for a very long time and I think that is due to the undulating nature of fame, living in those conditions."

Maybe, but Perry told a slightly different story in 2012, telling Vogue, "He didn't like the atmosphere of me being the boss on tour. So that was really hurtful, and it was very controlling, which was upsetting. I felt a lot of responsibility for it ending, but then I found out the real truth, which I can't necessarily disclose because I keep it locked in my safe for a rainy day."

Mehera Bonner Contributor Mehera Bonner is a news writer who focuses on celebrities and royals—follow her on Instagram.
This content is created and maintained by a third party, and imported onto this page to help users provide their email addresses. You may be able to find more information about this and similar content at piano.io
Advertisement - Continue Reading Below
More From Celebrity
Royals Feel "Great Sadness" for Meghan and Harry
How Celebs Are Celebrating Thanksgiving This Year
Advertisement - Continue Reading Below
Kristen Stewart Is "Protective" of Princess Diana
How Meghan & Harry Are Spending Thanksgiving 2020
Obama Ran for President Against Michelle's Wishes
Joe and Sophie Are Planning to Grow Their Family
Gigi Hadid Shared a Selfie With Her Daughter
Diana's Brother Wants 'The Crown' to Warn Viewers
Chrissy Said She's In a "Grief Depression Hole"
Taylor Said Joe Co-Wrote Two Songs on 'Folklore'